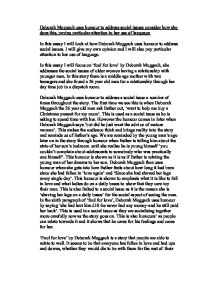 In this essay I will look at how Deborah Moggach uses humour to address social issues. I will give my own opinion and I will also pay particular attention to her use of language.

In this essay I will focus on ‘fool for love’ by Deborah Moggach, she addresses the social issues of older women having a relationship with younger men. In this story there is a middle age mother with two teenagers and she found a 26 year old man for a relationship through her day time job in a dispatch room.

Deborah Moggach uses humour to address a social issue a number of times throughout the story. The first time we see this is when Deborah Moggach the 26 year old man ask Esther out, ‘want to help me buy a Christmas present for my mum’. This is used as a social issue as he is asking to spend time with her. However the humour comes in later when Deborah Moggach says ‘but did he just want the advice of mature woman’. This makes the audience think and brings reality into the story and reminds us of Esther’s age. We are reminded by the young man’s age later on in the story through humour when Esther is telling him about the state of her son’s bedroom until she realise he is young himself ‘you couldn’t complain about adolescents to somebody who was practically one himself’. This humour is shown as it is as if Esther is relating the young man of her dreams to her son. Deborah Moggach then uses humour when she gets into how Esther feels about how long it had been since she had fallen in ‘love again’ and ‘Since she had shaved her legs every single day’. This humour is shown to emphasis what it is like to fall in love and what ladies do on a daily bases to show that they care top their man. This is also linked to a social issue as it is the reason she is ‘shaving her legs on a daily bases’ for the social aspect of seeing the man.

In the sixth paragraph of ‘fool for love’, Deborah Moggach uses humour by saying ‘she had lent him £10-he never had any money-and he still paid her back’. This is used in a social issue as they are socialising together more carefully now as the story goes on. This is also humours’ as people can relate towards it and it shows that he cares for his feelings and cares for her.

‘Fool for love’ by Deborah Moggach is a story that people are able to relate to well. It seems to be that everyone has fallen in love and had ups and downs, whether they would die to be with them for the rest of their lives or be with them for a period of time. ‘Fool for love’ emphasises just how strong love can be and how powerful it is to some people and this is how people are able to relate towards the story. Humour for a social issues is used a lot of the time throughout the story as a mature woman with a younger man does happen it is not too common which gives Deborah Moggach the perfect chance to play with the writing and ass humour into the story. ‘Fool for love’ is all about social issues with Esther meeting a new young man at work to meeting her son from the airport. I lot of the things that Esther does is because of a social issue and how she wants to come across to people when being social able.