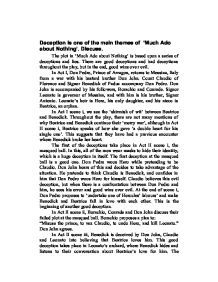 Deception is one of the main themes of 'Much Ado about Nothing'. Discuss. The plot in 'Much Ado about Nothing' is based upon a series of deceptions and lies. There are good deceptions and bad deceptions throughout the play, but in the end, good wins over evil. In Act I, Don Pedro, Prince of Arragon, returns to Messina, Italy from a war with his bastard brother Don John. Count Claudio of Florence and Signor Benedick of Padua accompany Don Pedro. Don John is accompanied by his followers, Borachio and Conrade. Signor Leonato is governor of Messina, and with him is his brother, Signor Antonio. Leonato's heir is Hero, his only daughter, and his niece is Beatrice, an orphan. In Act I scene i, we see the 'skirmish of wit' between Beatrice and Benedick. Throughout the play, there are not many mentions of why Beatrice and Benedick continue their 'merry war', although in Act II scene i, Beatrice speaks of how she gave 'a double heart for his single one'. This suggests that they have had a previous encounter where Benedick broke her heart. The first of the deceptions take place in Act II scene i, the masqued ball. ...read more.

Hero and Ursula then proceed to deceive Beatrice into thinking that Benedick loves her. When Hero and Ursula have gone, Beatrice says: "And Benedick, love on, I will requite thee, taming my wild heart to thy loving hand." This proves that Beatrice believes the deception, and now loves Benedick herself. In Act III scene ii, Don John begins the worst deception in the play. He invites Don Pedro and Claudio to see Hero's disloyalty, and they do. However, in Act III scene iii, the watch overhear the drunken Borachio confessing, to Conrade, his part in Don John's deception. He tells us of how he pretended that Margaret (Hero's maid) was Hero while he 'wooed' her in Hero's bedchamber. He also speaks of how Don John showed Don Pedro and Claudio this, and of how he was paid a thousand ducats for doing so. The watch then arrests the two villains. In Act III scene v, Dogberry, constable of the watch, tries to inform an impatient Leonato of the arrest of Borachio and Conrade. However, Dogberry, as always, mixes his words, and never gets to the point. Leonato impatiently leaves. If Leonato had been more patient, and Dogberry had spoken more clearly, then the play would've had a happier ending, but would have been two acts shorter. ...read more.

Don Pedro and Claudio arrive, and Antonio brings in the four masked women. Hero is brought forward, as Beatrice, and Claudio agrees to marry her, whom he thinks is Beatrice. When the deception is revealed, Claudio graciously accepts Hero. Then Beatrice and Benedick publicly admit their love for each other, and marry. It is then the end of the play, despite Don Pedro remaining alone. Punishment of Borachio and Don John are left until after the festivities, so that the happy mood of the play is not disrupted. The deceptions in the play, especially Don John's, have enormous repercussions on the rest of the plot. If there were no deceptions in 'Much Ado about Nothing', then the play would be very short. As the play's name suggests, noting, or spying, also has an important effect on the play, and without it, some of the deceptions could not take place. In the end, the play had a happy ending, but it could easily have been a tragedy, if Don John's evil plot had been successful. Even though good won over evil, the bad deceptions still did a lot of damage, Benedick and Claudio's friendship may never be the same again. During the play, the audience knows about all the deceptions because the aim of the play is to entertain an audience, which it succeeds in doing. ...read more.