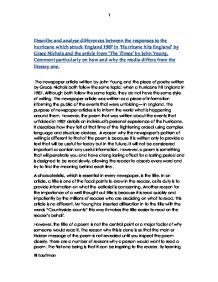 Describe and analyse differences between the responses to the hurricane which struck England 1987 in Hurricane hits England by Grace Nichols and the article from The Times by John Young.

Describe and analyse differences between the responses to the hurricane which struck England 1987 in 'Hurricane hits England' by Grace Nichols and the article from 'The Times' by John Young. Comment particularly on how and why the media differs from the literary one. The newspaper article written by John Young and the piece of poetry written by Grace Nichols both follow the same topic: when a hurricane hit England in 1987. Although both follow the same topic, they do not have the same style of writing. The newspaper article was written as a piece of information informing the public of the events that were unfolding--- in England. The purpose of newspaper articles is to inform the world what is happening around them. However, the poem that was written about the events that unfolded in 1987 details an individual's personal experience of the hurricane. It describes how they felt at that time of the frightening ordeal using complex language and structure devices. A reason why the newspaper's pattern of writing is different to that of the poem is because it is written only to provide a text that will be useful for today but in the future, it will not be considered important or contain any useful information. ...read more.

However, the layout of the article is what you would expect from a newspaper. The newspaper is written in columns. The reason for this is because it makes matters a lot easier for the reader as opposed to if it would have been written across the page therefore being an inconvenience to the reader. Something that is also a common phenomenon in a newspaper article is that there are many small paragraphs, some just a line or two long. The explanation for why this is done is so that it appears in appealing bite-sized chunks, which are easier for the reader to digest. The editors and the writers always think of the easiest way for the readers to understand their articles is because this makes people buy the newspaper. The two pieces of writing both differ in many ways when it comes to language. The poem talks in an informal manner whilst the newspaper talks in a formal style. With regards to the poem, its use of various complex figures of speech such as personification- "gathering rage" are used to describe the building hurricane winds. ...read more.

In the article, the writer bombards the reader with a large array of information ranging from statistical data, opinions and small interviews with the relevant authorities. This article sets out to inform in the most convenient way possible, making it clear to the reader by using simple but effective and essentially 'to the point' language. The structure is plain and it places the more important matters at the forefront, luring the readers into the article. With regard to the poem however, its language has been created along emotional lines with the motive of finding a deeper meaning to what has happened. The narration is through the eyes of the writer, making the reader feel closer to the action. The reader is addressed directly by the rhetorical questions and this structure essentially makes the reader reflect more on what he is reading. Essentially, in comparison between these two different texts, the article gives us what we need in the most practical manner, eventually dying out to lesser significant bits of information. Whereas the poem sets out to convey a powerful message and this is achieved in the build up and clarified in the climax. ?? ?? ?? ?? 1 Eli Kauffman ...read more.