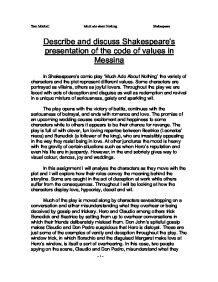 Describe and discuss Shakespeare's presentation of the code of values in Messina In Shakespeare's comic play 'Much Ado About Nothing' the variety of characters and the plot represent different values. Some characters are portrayed as villains, others as joyful lovers. Throughout the play we are faced with acts of deception and disguise as well as redemption and revival in a unique mixture of seriousness, gaiety and sparkling wit. The play opens with the victory of battle, continues with the seriousness of betrayal, and ends with romance and love. The promise of an upcoming wedding causes excitement and happiness to some characters while to others it appears to be their chance for revenge. The play is full of with clever, fun loving repartee between Beatrice (Leonatos' niece) and Benedick (a follower of the king), who are irresistibly appealing in the way they resist being in love. At other junctures the mood is heavy with the gravity of certain situations such as when Hero's reputation and even his life are in jeopardy. However, in the end sobriety gives way to visual colour, dances, joy and weddings. In this assignment I will analyse the characters as they move with the plot and I will explore how their roles convey the meaning behind the storyline. Some are caught in the act of deception at work while others suffer from the consequences. ...read more.

However, his mistakes hinder communication when, for example, Dogberry and the Watch try to tell Leonato that they have caught Borachio but cannot make themselves understood. Finally, some characters seldom speak at all, like the sullen and bitter Don John or the gentle but usually shy Hero and Claudio. Like Beatrice and Benedick, Dogberry and his assistant, Verges, contribute to the verbal amusing elements in the play; however, their low-comedy is far removed from the cerebral comedy of the warring lovers. Dogberry's misunderstanding and subsequent destruction of the English language is a source of hilarity throughout the play: Sexton: Which be the malefactors?Dogberry: Marry, that am I and my partner. Verges: Nay, that's certain; we have the exhibition to examine. Dogberry's unique misuse of logic befuddles everyone except Verges. Thus the hilarious effect is further enhanced: Verges: If you hear a child cry in the night, you must call to the nurse and bid her still it. Watchman: How if the nurse be asleep and will not hear us? Dogberry: Why, then, depart in peace, and let the child wake her with crying; for the ewe that will not hear her lamb when it baas will never answer a calf when he bleats. Verges: 'Tis very true. Dogberry's ridiculous mistakes are, of course, amusing in their own right, but they also serve to underscore aspects of his personality which are themselves humorous: his self-importance and desire to impress. ...read more.

Anything that will serve as a platform "to build mischief" is useful to him. We may well ignore the reality of such characters but Shakespeare draws our attention to the evil in such people as Don John who "spin motives out of their own bowels." Don John's sour and spiteful temper is controlled but his kindly behavior is to be "trusted with a muzzle, and enfranchised with a clog." In other words, he thinks himself robbed of freedom when he is not allowed to bite. I have described in this how the devious twists and turns of the plot and the actions and reactions of the well developed characters have presented the audience with a wide range of behaviour. The wit and wordplay of Benedick and Beatrice, the luck of Dogberry and the mastery of Don Pedro are all different aspects of human nature in action. The audience is engaged and amused. Held by the dramatic tension of knowing more than the actors, the absurdity of the situations highlight the vanities and pretensions of the characters in the imagined world of Messina. The audience is in this way invited to examine their own ways of behaving in the real world. And they might well agree with Benedick - 'For man is a giddy thing, and this is my conclusion' Tom Mitchell Much ado about Nothing Shakespeare - 1 - ...read more.