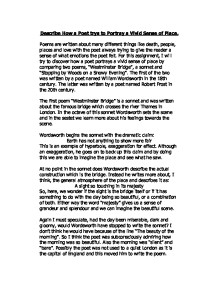 Describe How a Poet trys to Portray a Vivid Sense of Place.

Describe How a Poet trys to Portray a Vivid Sense of Place. Poems are written about many different things like death, people, places and love with the poet always trying to give the reader a sense of what emotions the poet felt. For this assignment, I will try to discover how a poet portrays a vivid sense of place by comparing two poems, "Westminster Bridge", a sonnet and "Stopping by Woods on a Snowy Evening". The first of the two was written by a poet named William Wordsworth in the 18th century. The latter was written by a poet named Robert Frost in the 20th century. The first poem "Westminster Bridge" is a sonnet and was written about the famous bridge which crosses the river Thames in London. In the octave of this sonnet Wordsworth sets the scene and in the sestet we learn more about his feelings towards the scene. Wordsworth begins the sonnet with the dramatic claim: Earth has not anything to show more fair This is an example of hyperbole, exaggeration for effect. Although an exaggeration, he goes on to back up this claim and by doing this we are able to imagine the place and see what he saw. ...read more.

In "Stopping by Woods on a Snowy Evening" I find it harder to picture rural New England. We do however learn that Frost was with his "little horse", so this means that he was in a cart being led by the horse. This was probably the standard mode of transport at this time as cars were not that long invented and likely too dear for the average person. Also, it is likely that there was quite a lot of countryside, all covered in white, due to the snow. I think this is because in the last line of the poem the poet write: And miles to go before I sleep which makes me think that he has a long distance to travel before he reaches his home or wherever he is going because villages were quite far apart. In the poem "Westminster Bridge" we are made very aware of what Wordsworth was feeling at the time he wrote the sonnet. This is probably due to the fact that the sestet of the sonnet expresses what he is feeling. However from the octave we learn a few things as well. For example the poet says: Dull would he be of soul who could pass by A sight so touching in its majesty From this we realise from the word "soul" that the "sight" affects him completely and he not only sees the beauty but he feels it in his soul as well. ...read more.

I have to admit that I liked both poems very much. "Westminster Bridge" is definitely a joyful sonnet and I can sense the poet's sense of bliss on the fine morning the poem was written. The poets' use of the octave and sestet is very important as well and I liked the way there was description of the scene in the octave and the poets' emotion in the sestet. "Stopping by Woods on a Snowy Evening" is very much in contrast to the other poem. I like the way we can never be entirely sure of what the ending means but also the way Frost describes the woods as "lovely, dark and deep" to me these words slightly contradict each other but work together wonderfully at the same time. In conclusion I think both poems give a vivid sense of place, "Westminster Bridge" being about the beauty of the bridge, London and the morning glow and "Stopping by Woods on a Snowy Evening" being about he dark and mysterious woods that lead the poet to be transfixed by them. And I think this poem requires a lot more imagination than "Westminster Bridge" to see the scene in my minds eye but both still are brilliant poems. ?? ?? ?? ?? ...read more.