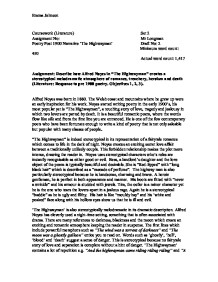 Describe how Alfred Noyes in

Coursework (Literature) Set 2 Assignment No: Mr Longman Poetry Post 1900 Narrative 'The Highwayman' Draft No: 2 Minimum word count: 450 Actual word count: 1,417 Assignment: Describe how Alfred Noyes in "The Highwayman" creates a stereotypical melodramatic atmosphere of romance, treachery, heroism and death (Literature: Response to pre 1900 poetry. Objectives 1, 2, 3). Alfred Noyes was born in 1880. The Welsh coast and mountains where he grew up were an early inspiration for his work. Noyes started writing poetry in the early 1900's, his most popular yet is "The Highwayman", a touching story of love, tragedy and jealousy in which two lovers are parted by death. It is a beautiful romantic poem, where the words flow like silk and from the first line you are entranced. He is one of the few contemporary poets who have been fortunate enough to write a kind of poetry that is not only saleable but popular with many classes of people. "The Highwayman" is indeed stereotypical in its representation of a fairytale romance which comes to life in the dark of night. Noyes creates an exciting secret love affair between a traditionally unlikely couple. This forbidden relationship makes the plot more intense, drawing the reader in. Noyes uses stereotypical characters who's roles are instantly recognisable as either good or evil. Bess, a landlord's daughter and the love object of the poem is typically beautiful and desirable. ...read more.

They have to meet in the night so they will not be found out. The legend of their souls haunting the moors together "when the wind is in the trees" is a rather romantic image. The effect of the returning lovers is romantic and it softens the tragedy of their deaths. The setting is romantic: an old inn and the constant talk of moonlight: "The road was a ribbon of moonlight", "Watch for me by the moonlight", "And he kissed its waves in the moonlight" and "For the road lay bare in the moonlight" . It is clear to see the love between Bess and the highway man. Their love is strong enough for Bess to give her own life to save the highwayman's. The highwayman is seen as a romantic figure who wears rich, jewelled clothes and a dignified "bunch of lace at his chin". Effective language also adds to the romance of the poetry which brings the story to life in the readers mind. The moon is a symbol of love and this image is used several times. One phrase which sticks in the mind is "the blood of her veins.....throbbed to her love's refrain" as this embodies their love for one another. Alliteration, "Ghostly galleon" and "Over the cobbles he clattered and clashed" as well as onomatopoeia, "tlot-tlot, tlot-tlot" add to the romance. ...read more.

'The Highwayman' is a sad tale of death. Both deaths in the poem are very tragic. The first, Bess's was a selfless act to save a loved one and the second, the highwayman's, happened when he returned to the scene to seek revenge on whoever caused his lovers' death. In some ways you could say that the two lovers were re-united by death and legend says that the souls of the two lovers are still sometimes seen haunting the moors whenever the moon is "a ghostly galleon, tossed upon cloudy seas". Noyes's constant use of the word 'black' symbolises death. This could be an early prediction of their fate. Bess is "Black-eyed" and "plaits a dark red love-knot into her long black hair" whilst the highwayman always rides during the darkest hours. Another sign that both lovers will die is the phrase "There was death at every window". The "purple moor" and the "red-coat troop" are symbols of blood which is often associated with death. Although 'The Highwayman' is very stereotypical there are some factors which oppose this view. For example Bess is not portrayed as a feeble woman waiting to be saved. She takes matters into her own hands and acts very heroically to save her lover. It is also important to recognise that the use of the colours black and white are reversed. Instead of white symbolising goodness and purity it is used to describe Tim's evil face. On the other hand, Bess, the heroin and innocent character is associated with the colour black. Emma Johnson ...read more.