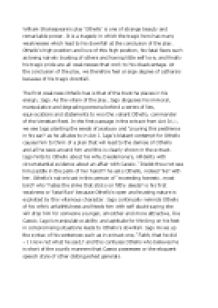 ï»¿William Shakespeare’s play ‘Othello’ is one of strange beauty and remarkable power. It is a tragedy in which the tragic hero has many weaknesses which lead to his downfall at the conclusion of the play. Othello’s high position and love of this high position, his fatal flaws such as being naïvely trusting of others and having little self love, and finally his tragic pride are all weaknesses that work to his disadvantage. At the conclusion of the play, we therefore feel a large degree of catharsis because of his tragic downfall. The first weakness Othello has is that of the trust he places in his ensign, Iago. As the villain of the play, Iago disguises his immoral, manipulative and degrading persona behind a series of lies, equivocations and statements to woo the valiant Othello, commander of the Venetian fleet. In the first passage in the extract from Act IV, i, we see Iago planting the seeds of jealousy and “pouring this pestilence in his ear? ...read more.

When Othello believes that his marriage has become little more than ?A frail vow betwixt an erring moor and a super-subtle Venetian? after the handkerchief is lost, Othello storms into a violent fit of rage fuelled by Iago who aggravates the situation further. Iago warns Othello of jealousy, ?Beware my lord of jealousy; it is the green eyed monster which doth mock the meat it feeds on.? Ironically, if Othello had listened to Iago?s timely advice, then his fits of rage would calm his inner despise for his wife and her murder may perhaps have never taken place. However, such is Othello?s ?free and open nature? that Iago even tells him how to kill his wife for her alleged infidelity. This significant weakness is one that is central to understanding the tragedy as a whole and leads us as the audience pitying the situation Othello is in by being consumed in Iago?s penetrating and deadly inconspicuousness. ...read more.

Overall, we are left feeling contempt for Iago but ironically, sorrow for Othello as the tragic hero of the play whose many weaknesses cause him to be consumed with jealousy and rage. In conclusion, ?Othello? is a tragedy in which Othello, the tragic hero, has a number of weaknesses that ultimately leads to his downfall and the deaths of others. His ability to be so openly trusting of others leads to his exploitation and at the conclusion of the play, we do feel a large degree of catharsis; a feeling of being ?cleaned out? by the tremendous force that is contained within the play. Othello?s character is such that he is easily influenced by his supposed ?friend? Iago, who at the end of the play is rightly described as a ?most heathenish?spartan dog.? We feel satisfied that Othello ?loved not wisely, but too well? but overall feel that the quartet of deaths that resulted should never have happened despite the tragic hero?s major weaknesses. ...read more.