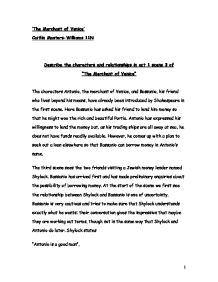 Describe the characters and relationships in act 1 scene 3 of

'The Merchant of Venice' Caitlin Masters-Williams 11N Describe the characters and relationships in act 1 scene 3 of "The Merchant of Venice" The characters Antonio, the merchant of Venice, and Bassanio, his friend who lives beyond his means, have already been introduced by Shakespeare in the first scene. Here Bassanio has asked his friend to lend him money so that he might woo the rich and beautiful Portia. Antonio has expressed his willingness to lend the money but, as his trading ships are all away at sea, he does not have funds readily available. However, he comes up with a plan to seek out a loan elsewhere so that Bassanio can borrow money in Antonio's name. The third scene sees the two friends visiting a Jewish money lender named Shylock. Bassanio has arrived first and has made preliminary enquiries about the possibility of borrowing money. At the start of the scene we first see the relationship between Shylock and Bassanio is one of uncertainty. Bassanio is very cautious and tries to make sure that Shylock understands exactly what he wants; their conversation gives the impression that maybe they are working out terms, though not in the same way that Shylock and Antonio do later. ...read more.

Shylock may be more practiced in the art of keeping his temper because at this time in Venice, Jews were not allowed to retaliate should they be attacked by Christians. Shylock is also furious because of Antonio's frequent public denunciations of him for being a Jew and a money lender and because Antonio had spat at him and kicked him. Shylock intends to use this opportunity to ruin Antonio. We learn Antonio is an anti-Semite vociferous in the condemnation of Jews and their money lending. Antonio who claims to be a 'Christian' does not seem to have behaved in a very charitable way towards the Jew and this contrasts greatly with his selfless acts towards Bassanio; he is prepared to borrow money for the latter but has been outwardly violent towards Shylock. He comes over as a bit of a bully and one who is not afraid to use his strength as he knows he will be supported by the law of the land. It is possible that a modern audience is reading more into Antonio's character than an Elizabethan audience would have; a modern audience will have been influenced by the holocaust while a Shakespearean audience would see nothing wrong in baiting a Jew in a play in the same way that a modern audience would perhaps make fun of or bully an alien from outer space. ...read more.

We are left with the impression that Shylock is highly intelligent and extremely good at his 'job' using all the information he has at his disposal before agreeing to loan money. He is true to his religious faith in spite of all the racist abuse he has received. Perhaps because of this abuse, he is bitter and anxious to avenge himself for past wrongs, real or imagined. In contrast, Antonio is a wealthy merchant, rich and well known in Venice. He seems to be a loyal friend to Bassanio for whom he is willing to go against his principles and borrow money from a moneylender. But there is a darker side to him; he has racially abused the Jews simply because he can and his anti-Semitism makes him appear a bully who is willing to be led by the law, whether or not it is a bad law, rather than by his religion which preaches love thy neighbour. Bassanio is a bit of a 'good time guy' who has wasted his own money and is prepared to marry a rich heiress for her fortune. He is also willing to let Antonio borrow money on his behalf even though he is suspicious of the terms offered by the moneylender. ?? ?? ?? ?? 1 ...read more.