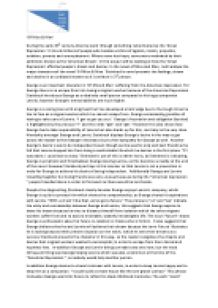 Describe the Dreams of the Characters in &quot;Of Mice &amp; Men&quot;.

﻿?Of Mice & Men? During the early 19th century America went through something remembered as the ?Great Depression.? It struck millions of people who became victims of ageism, racism, prejudice, isolation, poverty and unemployment. Where some lost hope, some were motivated by their ambitions known as the ?American Dream.? In this essay I will be looking at how the ?Great Depression? affected people?s dream and desires. In the novel of Mice and Men, I will analyse the major characters of the novel ?Of Mice & Men.? Steinbeck?s novel presents the feelings, dream and desires in an unbiased manner as it is written in 3rd person. George is an important character in ?Of Mice & Men? suffering from the American depression. For George there is no escape from him being a migrant worker because of the American Depression. Steinbeck introduces George as a relatively small person compared to his huge companion Lennie; however George?s mental abilities are much higher. George is a caring man with a big heart but has developed a hard edge due to the tough times he has to face as a migrant worker which he cannot escape from. George occasionally grumbles of having to take care of Lennie. ?I got to get you out.? George?s frustration and obligation (burden) is highlighted by the pronoun ?I? and the verbs ?got? and ?get.? However this also shows how George has to take responsibility of Lennie but also stands up for him, contrary to the very close friendship amongst George and Lennie. Steinbeck displays George?s desire in this way to get across the reader to feel George?s hindrance but to feel sympathy for George as well. Another George?s desire?s was to be independent (even though Lennie was his only and best friend) as he felt that Lennie stopped him from living a comfortable life which he desires in the first place. ?If I was alone, I could love so easy.? Steinbeck?s use of this is rather ironic, as Steinbeck is indicating, George is prophetic and foreshadows George loosing Lennie, as this becomes a reality at the end of the novel. ...read more.

?The white kids came to play at our place.? Steinbeck uses the verb ?play? which insinuates unlimited happiness and joy. As the phrase ?white kids? suggests there was no discrimination; which Steinbeck explores the theme of innocence. In-addition this is also implies how Crooks childhood was content contrariety to the current situation which is serious suggests how Crook?s present is very different in contrast to his childhood. Now he has become isolated and insecure because he is black man who is segregated-for this reason Steinbeck wants the reader to feel sympathy for him. As any black person would be separated from the white society, where the black person would be left alone to suffer and whereas the white society could do anything they want which was very communal at the time of the ?American Depression?. Crooks is in conflict (whether he wants a companion or not) and Steinbeck uses irony to express this. On one hand, it shows that Crooks desires a companion. ?Book ain?t no good, a guy needs someone to be near him.? The noun ?needs? implies the need of human interaction, need of company and security. Which suggests his books are just an object and cannot be compared with human communication. Steinbeck portrays him like this, to shows the reader how Crooks is actually lone and is isolated from the world, as it shows he desires freedom. A black person being discriminated was very common at this time. On the other hand, when Lennie comes into Crook?s room he suddenly becomes uncivil and defensive as he imagines a big guy like Lennie could cause trouble for him; here the theme of prejudice is explored. ?I ain?t wanted in the bunkhouse, and you ain?t wanted in my room.? Steinbeck uses the repetition of ?ain?t wanted? emphasises the rejection that Crooks feels. This phrase also implies that Crook?s wants Lennie to feel empathy-feel his pain of isolation and segregation. ...read more.

Curley?s insecurities towards his wife force her into flirting with the others but most importantly dressing up beautifully. As many do not talk to her due to her reputation, ?Her finger nails were red.? The colour rouge connotes romance, love and flirtatiousness but also hints at danger; as the ranch workers know interaction with Curley?s wife can lead to trouble because of her desire of fighting her isolation. Which the predominant association between red and Curley's wife connotes danger in relation to red blood, which foreshadows future events within the novel. Where at the start Steinbeck presents Curley?s wife as a villain and our negative feelings towards her develop as names like ?jailbait? and ?tart? are given to her. At the same time Steinbeck changes the readers feelings without Curley?s wife changing. Steinbeck's description of Curley?s wife after her death is evidently more complimentary, as we feel sympathy for her. Which Steinbeck presents her death as a ?release of misery.? The word ?misery? implies isolation, rejection and discrimination Curley?s wife had to face at the time of the American Depression, the real thing that isolates her is that she is a female in an all-male world. In-addition she uses her beauty to attract men to fight against her isolation towards her in the ranch due to her reputation, as she desires a companion which she can talk to. This suggests how her life has sculpted her personality which derives an increasingly sympathetic and piteous view on Curley's wife from the reader. This would also support Steinbeck's approach in where characters are influenced by their relationship to their surroundings and are essentially controlled by the environment in which they are situated through chance for e.g. Curley?s wife. Also Steinbeck compares her ?soft hair? with the rough hay-the rough texture compared to softness is like darkness to light. As I think that Steinbeck's negative representation of Curley's wife could be an example of moralization, however it is not negative because Steinbeck advocates misogyny but is presenting the reality of society at the time. ...read more.