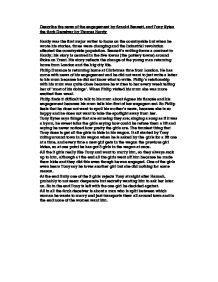 Describe the news of the engagement by Arnold Bennett, and Tony Kytes the Arch Deceiver by Thomas Hardy.

Describe the news of the engagement by Arnold Bennett, and Tony Kytes the Arch Deceiver by Thomas Hardy Hardy was the first major writer to focus on the countryside but when he wrote his stories, times were changing and the Industrial revolution affected the countryside population. Bennett's writing forms a contrast to Hardy; his story is centred in the five towns (the pottery towns) around Stoke on Trent. His story reflects the change of the young man returning home from London and the big city life. Philip Durance is returning home at Christmas time from London. ...read more.

So Philip feels that he does not want to spoil his mother's news, because she is so happy and he does not want to take the spotlight away from her. Tony Kytes says things that are amusing they are; singing a song as if it was a hymn, he sweet talks the girls saying how could he refuse them a lift and saying he never noticed how pretty the girls are. The funniest thing that Tony does is get all the girls to hide in his wagon. It all started by Tony riding around town in his wagon when he is asked by the girls for a lift one ...read more.

One of the girls even hears Tony say he loves another girl but she did nothing for some reason. At the end Unity one of the 3 girls rejects Tony straight after Hannah, probably to not seem desperate but secretly wanting him to ask her later on. So in the end Tony is left with the one girl he decided against. All in all the Arch deceiver is about a man who is split between which woman he wants to marry and just transports them all around town and in the end none of the women want him. ...read more.