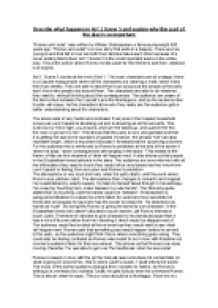 ﻿Describe what happens in Act 1 Scene 5 and explain why this part of the play is so important ?Romeo and Juliet? was written by William Shakespeare a famous playwright 400 years ago. ?Romeo and Juliet? is a love story that ends in a tragedy. There are two young lovers that fall in love but both their families hates each other because of a never ending family feud. Act 1 Scene 5 is the most important scene in the entire play. This is the scene where Romeo meets Juliet for the first time and their, destined love begins. Act 1, Scene 5 comes at the end of Act 1. The main characters are all onstage: there is a Capulet masquerade where all the characters are wearing a mask which hides their true identity. They are able to show their true colours as the people at the party don?t know who people are around them. The characters are able to do whatever they want to, without thinking about the consequences. The audience are aware of the family feud between the Capulet?s and the Montague?s, and so the audience fear trouble will ensue. ...read more.

It also shows that Lord Capulet want the party to be perfect and want to impress his guests and if there would be a fight at the party then, he would loose his pride, In the Elizabethan times pride was a very important thing to rich people and Lord Capulet did not want to lose it at a party where there are important guests. Tybalt does not agree with his uncle and foolishly talks back to him. This is making Lord Capulet angry, this is shown by, ?Am I the master here, or you?? The word ?master? shows us that Lord Capulet considers himself higher up in the hierarchy and want to be respected. He is asking a question to make Tybalt get the message that he is lower than Lord Capulet. It also shows a sudden mood change within Lord Capulet. At first he was very happy and did not mind a Montague in the house of Capulet?s however when he realises that someone has just disobeyed him, he gets angry and tells of Tybalt. This reveals a lot about Lord Capulet?s character, he basically want people to respect him at all times. ...read more.

The only person Juliet loved seemed to be her only enemy as well. At the moment the audience, would be feeling very sympathetic as they know how both of them are feeling, this is where it relates to the theme of fate. When Romeo?s prediction has come true. The scene ends at a hair-raising and heartbroken moment. The audience would want to know what would be happening next and would be heartbroken on behalf of Romeo and Juliet. We have met all the main characters and got an understanding about their personalities. The theme of love and hate is present during the scene. The scene is the most important in the entire play because it ends at a point where Tybalt is left outraged and Romeo and Juliet get to know each others true identity. When Tybalt is left outraged the audience would start to wonder if he gets his hands on Romeo or not. In the scene Romeo says that he had found his destiny however when he realises Juliet is a Capulet, we don?t know if she is still his destiny. This is why the scene is important and the audience would want to see what happens in the rest of the play. Romeo and Juliet probably start their destined love and Tybalt wants to kill Romeo. ...read more.