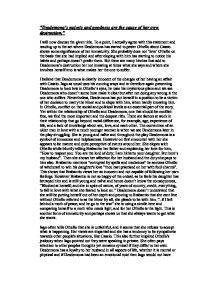 &quot;Desdemona's naivety and goodness are the cause of her own destruction.&quot;

"Desdemona's naivety and goodness are the cause of her own destruction." I will now discuss the given title. To a point, I actually agree with this statement and reading up to the act where Desdemona has started to pester Othello about Cassio shows some significance of her immaturity. She probably does not 'love' Othello on the basis that she had implied and after eloping with him has starting to notice his habits and perhaps doesn't prefer them. But there are many hitches that add to Desdemona's destruction her not knowing at times what she says and where she involves herself into is what makes her the one to suffer. I believe that Desdemona is clearly innocent of the charges of her having an affair with Cassio. Iago as usual uses his cunning ways and is therefore again presenting Desdemona to look low in Othello's eyes, he uses his mysterious plans and we see Desdemona who doesn't some how make it clear but after not doing any wrong is the one who suffers. Nevertheless, Desdemona has put herself in a position to be a victim of her decision to marry the Moor and to elope with him, when hardly knowing him. In Othello, conflict on the social and political levels is an essential part of the story. Yet within the relationship of Othello and Desdemona, one that should be conflict-free, we find the most important and the deepest rifts. ...read more.

seem to think Desdemona may be flirting with Iago, which does not look wise on her character as then later she does so with Cassio. "I am not merry; but I do beguile the thing I am by seeming otherwise. Come how wouldst thou praise me"? However Roderigo tells us that he sees nothing wrong in Desdemona's behaviour " I cannot believe in her; she's full of most blessed condition." The audience see a slightly different angle and view from Roderigo's side as they are used to Iago's foolish act that he loves and continuing to make Desdemona look low and play with her mind. Desdemona decides that she wants to advocate for Cassio. She tells Emilia so, and that she believes Cassio is a good person, and has been wronged in this case she tries to do everything she can to persuade her husband to take Cassio back. Cassio speaks with her briefly, but leaves just as Othello enters because he does not want a confrontation. Iago takes this opportunity to play on Othello's insecurities, and make Cassio's exit seem guilty and incriminating. Iago has very relevantly pushed Cassio's case forward to Desdemona to put forth to Othello. That is Iago's spite at work and Desdemona not being very wise, as it isn't much of her business in the first place and again she puts Othello in a two stated mind of what is actually going, why is she so persistent. ...read more.

"I ne'er saw this before. Sure there's some wonder in this handkerchief; I am most unhappy in the loss of it." Again the imagery of her being childlike and immature is brought out. This essay title has a lot of significance and we notice how there are many things that show Desdemona is innocent and hence she may be the cause of her own destruction. Even though Iago puts up an argument to this and perhaps the way Desdemona has handled Iago and the Cassio case was not wise and mature, but she is na�ve and was easily trapped in Iago's plan. Even Othello has put up an argument against this title in Act 3 scene 3, where he tells us Desdemona's good points and the gifts that she holds. "To say my wife is fair, feeds well, loves company, is free of speech, sings, plays and dances.." We can see his love is truly shown and he expresses this through words for the audience to feel, this is ironically delivered at a point where jealousy is taking hold. "For she had eyes, and chose me. No, Iago...Away at once with love or jealousy." Was Othello's love becoming jealousy or was Desdemona frankly making this happen by her stupidity and paid too much attention elsewhere. I believe Iago is the man behind it who is jealous of Othello and drew Desdemona to make foolish mistakes leading to her own destruction. ...read more.