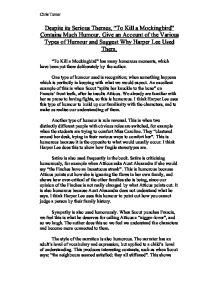 Despite its Serious Themes, &quot;To Kill a Mockingbird&quot; Contains Much Humour. Give an Account of the Various Types of Humour and Suggest Why Harper Lee Used Them.

Despite its Serious Themes, "To Kill a Mockingbird" Contains Much Humour. Give an Account of the Various Types of Humour and Suggest Why Harper Lee Used Them. "To Kill a Mockingbird" has many humorous moments, which have been put there deliberately by the author. One type of humour used is recognition; when something happens which is perfectly in keeping with what we would expect. An excellent example of this is when Scout "splits her knuckle to the bone" on Francis' front teeth, after he insults Atticus. We already are familiar with her as prone to having fights, so this is humorous. I think Harper Lee uses this type of humour to build up our familiarity with the characters, and to make us realise our understanding of them. ...read more.

Satire is also used frequently in the book. Satire is criticising humorously, for example when Atticus asks Aunt Alexandra if she would say "the Finches have an Incestuous streak". This is humorous because Atticus points out how she is ignoring the flaws in her own family, and shows how over-critical of the other families she is being, since our opinion of the Finches is not really changed by what Atticus points out. It is also humorous because Aunt Alexandra does not understand what he says. I think Harper Lee uses this humour to point out how you cannot judge a person by their family history. ...read more.

I think one reason for the use of humour in this book is to make it more interesting to read; at some points the reader's interest would be lost if there wasn't any humour. Another reason is that humour is needed to release tension at certain points, such as when Scout is talking to Mr Cunningham outside of the jail. She says unintentionally funny things, such as "I beat him up once, but he was real nice about it". This is the only funny aspect of an essentially tense situation, and so the humour releases the tension that the chapter has built up. In conclusion, humour is used primarily to release tension, make the book more interesting, and increase familiarity with characters. ?? ?? ?? ?? Chris Turner ...read more.