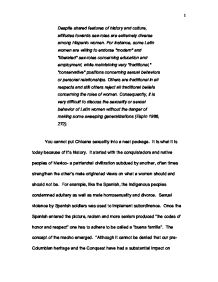 Despite shared features of history and culture, attitudes towards sex-roles are extremely diverse among Hispanic women.

Despite shared features of history and culture, attitudes towards sex-roles are extremely diverse among Hispanic women. For instance, some Latin women are willing to endorse "modern" and "liberated" sex-roles concerning education and employment, while maintaining very "traditional," "conservative" positions concerning sexual behaviors or personal relationships. Others are traditional in all respects and still others reject all traditional beliefs concerning the roles of women. Consequently, it is very difficult to discuss the sexuality or sexual behavior of Latin women without the danger of making some sweeping generalizations (Esp�n 1986, 272). You cannot put Chicana sexuality into a neat package. It is what it is today because of it's history. It started with the conquistadors and native peoples of Mexico- a patriarchal civilization subdued by another, often times strengthen the other's male originated views on what a woman should and should not be. For example, like the Spanish, the indigenous peoples condemned adultery as well as male homosexuality and divorce. Sexual violence by Spanish soldiers was used to implement subordinance. Once the Spanish entered the picture, racism and more sexism produced "the codes of honor and respect" one has to adhere to be called a "buena familia". The concept of the macho emerged. "Although it cannot be denied that our pre-Columbian heritage and the Conquest have had a substantial impact on Mexican culture and on expressions of masculinity, the explanation that appears most plausible is that machismo and the cult of masculinity, in their most extreme and negative form, were introduced to the New World by the Spanish conquistadores. They provided the model of the figure of the negative macho -- daring, arrogant, dominant, insensitive, warring, irreverent, lewd, unpredictable, and lustful men of action who committed numerous chingaderas in the course of the Conquest and in the name of their Christian god. (Mirand�(c), 1997, p. 57)." Even in recent times, the position of women has not revolutionized much. ...read more.

The physical space - the squalid and cramped rooms - reinforces feelings of confinement. The characters are hemmed into their surroundings. As they move about the undersized rooms, they push against furniture and each other, overturn things, etc. They are framed in close-up to extreme close-up so that their images fill and spill over the edges of the lens. Their images are rarely isolated. Bodies overlap. Because of this style there is a heightened sense of their bodies and hyper sexuality. Octavio is highly passionate, even forceful sometimes when he tries to show his love for Susanna. The next story is "Valeria y Daniel". Valeria is a supermodel that was the woman in the white coupe. Before the catastrophe, she was a top emblematic model with a "for show" relationship with a handsome actor that served to make them both even more popular. Her actual lover is Daniel a married man and magazine executive, who eventually leaves his wife to be with Valeria. Of course, once they are together they fall into characteristic relationship patterns and do not seem altogether as happy as they were throughout the affair. In the scene where it is revealed who Valeria's true lover is, the wood floor of their brand new apartment ominously cracks and makes a hole as Valeria runs to Daniel. The car accident cripples the model, ruining her career, her self-image, and her self-esteem. A giant photograph of her on a billboard across the street mocks her as she moves around her apartment in a wheelchair. One day, her little pet dog, a white fluffy terrier named Ritchie, gets trapped beneath the floorboards chasing after a ball. At first, neither she nor her boyfriend knows how to rescue Ritchie. This segment effectively deals with the psychological trauma of amputation and of a career based solely on appearance. Her love story is also tragic, as the passion and romance vanish from their relationship due to her physical state, her mental anguish and her obsession with freeing Ritchie. ...read more.

He was thrown in jail and instructed his wife to tell their daughter he died. Throughout the movie he wrestles with his failure as a father and attempts desperately to work up the courage to seek his daughter's forgiveness. He finally does call her and tearfully confesses his sins into a long message on an answering machine. It is never fully explained whether he is forgiven or not but because he does not expect a reply, it seemed like the phone call was made so he could just stop holding in the truth. It was for his own closure more so than his daughter's. The film reveals a bit of Mexican culture and sexuality. More than anything, however, Amores Perros is about tragedy, irony, and coincidence. Tales of lost love, unrequited love, and almost true love are woven throughout the film. While I did enjoy most aspects of the movie, when analyzing its portrayal of women, you can see that Amores Perros offers no new types of female characters. As expected, it spends more time developing the films male characters, leaving the female characters to be used and abused and left with the blame of why things went wrong. We are supposed to ask "What's wrong with her? Why doesn't she just leave with Octavio?" "Can't Valeria see that Daniel is trying to make her happy?" "Why doesn't Chivo's daughter just forgive him?" The title could be taken in two ways: the role of dogs is both integral to the plots and is also symbolic, as Amores Perros shows that "love is a bitch." One of the themes is definitely that dogs offer unconditional love in a way that human beings are simply not capable of. Or "Love's A Bitch" could be seen as giving the emotion love a negative female connotation. Love's a bitch because all women are just bitches who lure you into thinking you're in love and end up screwing up your life. Pobresito guys, you really have it rough. ...read more.