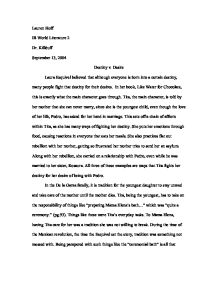 Lauren Hoff IB World Literature 2 Dr. Killduff September 13, 2004 Destiny v. Desire Laura Esquivel believed that although everyone is born into a certain destiny, many people fight that destiny for their desires. In her book, Like Water for Chocolate, this is exactly what the main character goes through. Tita, the main character, is told by her mother that she can never marry, since she is the youngest child, even though the love of her life, Pedro, has asked for her hand in marriage. This sets off a chain of affects within Tita, as she has many ways of fighting her destiny. She puts her emotions through food, causing reactions in everyone that eats her meals. She also practices flat out rebellion with her mother, getting so frustrated her mother tries to send her an asylum. Along with her rebellion, she carried on a relationship with Pedro, even while he was married to her sister, Rosaura. All three of these examples are ways that Tita fights her destiny for her desire of being with Pedro. ...read more.

Since Tita can not marry Pedro, he marries her sister Rosaura, to be closer to Tita. In this case, not only is Tita fighting her own destiny, but her love is also helping her fight it. He is putting himself closer to her, making her desire even stronger than is has been previously. Once again, Mama Elena holds onto her tradition, by "not letting her out of her sight for a single instant" (pg.79) to make sure her and Pedro do not try to kindle their love affair. To fight this tradition, Tita uses two forms of rebellion, the first being with her food, which she used early on in the story. Tita was taught by the cook Chencha, at a very young age the culinary arts. Tita's cooking often has an effect on people, to the point that when they eat her meals, they felt the same emotions that Tita had while cooking the meal. Her cooking is a way of acting out against the tradition because the emotions brought on that are "cooked" into her foods often times are caused by her love and passion for Pedro or her bitterness towards her mother for not letting her be with Pedro. ...read more.

Tita has never before fought against her mother, or her destiny. It's almost as if she is confused and not sure what to do now that she has somewhat of freedom. Mama Elena tries to place her in an asylum, but instead Tita goes to Dr. John Brown's house. When Tita returns from Dr. Browns to take care of her mother, it is her old subconscious way of fighting her destiny that eventually causes Mama Elena's death. Mama Elena will not eat the soup Tita makes her "because it is nasty and bitter..." (pg.130). Mama Elena thinks it is poisoned and will not eat it. Although in truth subconsciously Tita is making the soup bitter since this is the way she feels towards her mother, just as she had made the weeding cake. Since she will not eat, Mama Elena eventually dies. Through this journey of hardship, Tita eventually wins her desire, Pedro, over her destiny and "Never again would they be apart" (pg.245) Laura Esquivel has always been interested in the "relationship between outer reality and inner desire", and in this novel she explores this relationship to the fullest extent. Tita's long journey turns out victorious in the end, just as Esquivel believes it is the only way to find your true self. ...read more.