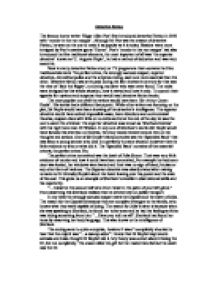 Detective Fiction The famous horror writer 'Edgar Allen Poe' first introduced detective Fiction in 1841 with 'murder in the rue morgue'. Although Mr Poe was the creator of detective Fiction, he was not the one to make it as popular as it is today. Readers were more intrigued by Poe's creative genre 'Horror'. Poe's 'murder in the rue morgue' had also introduced the five traditional elements, the most important of all was 'the superior detective' known as 'C. Auguste Dupin', he had a method of deduction and was very eccentric. Now in every detective Fiction story or TV programme their contains the Five traditional elements 'the perfect crime, the wrongly accused suspect, superior detective, dim witted police and the surprise ending, each one more essential than the other. Detective fiction was at its peak during the late nineteenth century for that was the time of 'Jack the Ripper', a cunning murderer who was never found. The mobs were intrigued by this whole situation, how it started and how it ends. To quench their appetite for mystery and suspense they would read detective fiction books. The most popular out of all the writers would have been 'Sir Arthur Conan Doyle'. His stories had a different focus point. While other writers are focusing on the plot, Sir Doyle would have been showing of his detective's intelligence. The superior detective would have solved impossible cases, have ridiculous and controversial theories, suspect clues with little or no evidence but at the end of the day he was the one to catch the criminal. The superior detective was known as 'Sherlock Holmes' with his right hand man Dr Watson. In any one of Sherlock's stories Sir Doyle would have focused his attention on Holmes, the story would revolve around him on his thoughts and actions. One of Sir Doyle's famous stories was the 'Speckled Band' that was about a young woman who died in a perfectly humane situation however there is little evidence to who or what did it. ...read more.

After observing the body "Poirot's eyes were darting about the compartment. They were bright and sharp like birds." Poirot had found a pipe that did not belong to Cassetti, and immediately claimed there was a man in the room at the time of the death. "There was no pipe in any of his pockets, and no tobacco or tobacco pouch" To show his superiority Poirot claims that when he looks at evidence "It is the psychology I seek, not the finger print" like Sherlock, Poirot has the same mentality. He seeks for the psychological, however Poirot concentrates on the facts where as Sherlock challenges the more controversial side and when clues are being examined Poirot looks at them and then thinks are " those clues are they really what they seem to be. When Poirot was seeking information about the Armstrong case, he had spoke to Armstrong's secretary who had failed to cooperate, however using his intelligence he had listened to her grammar very carefully and assumed she was lying because of her slang. When Poirot is trying to solve a problem, he tends to try and think like the murderer "that if the murderer intended us to believe that he had escaped by way of the window he would naturally make it appear that the other two exists were impossible". He Poirot is trying to perceive how the murderer got out. Like Sherlock Holmes, Poirot is very intelligent and also has some eccentric features. Poirot, for example, when he goes to bed, he wears a special headgear to keep his hair in place. In 'The Murder on the Orient express' Christie uses both dim-witted police and sidekick and roles them into one element. In 'The murder orient express' she uses Dr Constantine and the director as this element. Both act as the dumb police and the right hand man. While Poirot would be investigating or interviewing, the director and the Dr would always be at Poirot side coming up with ridiculous suggestions as if they were his sidekicks and the dim-witted police at the same time. ...read more.

Although The Burning End doesn't contain any dim-witted police, the story still contains a sense of dim wittedness. Like Agatha Christie, Ruth Rendell uses her dim witted police role in her characters. While Brian and Michael are suggesting why Linda is miserable, they come across the fact that she feels guilty. However they don't realise she is upset because she might have literally killed Betty. Brian and Michael knew Linda was feeling guilty but they never took it into consideration that Linda could of caused the fire. The brothers are too dim witted to see that Linda was feeling guilty over the fact that Linda may have caused the death. Michael suggests that its "guilt" that is making Linda miserable. Brian responds to Michael's theory by blasting back "What's she got to be guilty about? She couldn't have done more if she'd been Mum's own daughter.'" This would of made the crime even more perfect if it was Linda. Detective Fiction has been changed and manipulated over the past century, from Sir Doyle to Ruth Rendell. Detective Fiction has changed with time and time has changed with Detective fiction. Since Sir Doyle detective fiction has introduced new excitements and has gradually manipulated the readers thoughts. Detective stories have changed so much, from having the superior detective as the centre point to having no detective at all. Agatha Christie was the one, who began manipulating Detective Fiction, although she had made a few adjustments, she still kept the concept. Agatha intended to use the ideas of past detective writers and present them in her own way Ruth Rendell the most recent Detective writer of my studies is a prime example of how Detective fiction has changed. Ruth stories are in contrast with Sir Doyle's because Ruth uses the ideas and manipulations of the recent Detective writers (Agatha Christie) and recapitulates them to create new means of excitement. This is an example of how Detective fiction has changed and will proceed in the future. ...read more.