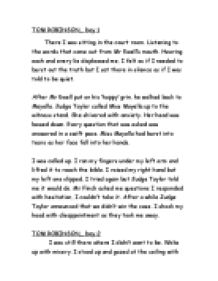 ﻿TOM ROBINSON? Day 1 There I was sitting in the court room. Listening to the words that came out from Mr Ewell?s mouth. Hearing each and every lie displeased me, I felt as if I needed to burst out the truth but I sat there in silence as if I was told to be quiet. After Mr Ewell put on his ?happy? grin, he walked back to Mayella. Judge Taylor called Miss Mayella up to the witness stand. She shivered with anxiety. Her head was bowed down. Every question that was asked was answered in a swift pace. Miss Mayella had burst into tears as her face fell into her hands. I was called up. I ran my fingers under my left arm and lifted it to reach the bible. ...read more.

I was scared and confused I just did it, I ran loose. I had no other clue I just ran. My legs flung in the air as I was about to set loose. My heart raced, I turned back to see if they were after me. I saw a gun pointed in my direction, my name was called to stop but I continued to run. They yelled my name like an angry fire. They pulled the trigger, where they aimed had reached my heart, I fell on the floor in pain knowing that my journey had ended there. TOM?S SON? Day 1 Knowing my father is in court was upsetting. I couldn?t help the feeling that my father had been accused for something he is not responsible of. ...read more.

By the time, we all had fallen asleep. In the morning I was expecting a ?good talk? with Mr Finch about my father?s arrival. It was a long day, my eye caught a man in a car but it wasn?t Mr Finch. I skipped around trying to find Mr Finch in his car, but there was no sign of him. The time went by as the sun faded in the clouds. I spotted Mr Finch in his car; he took a step out of the car and took a deep breath. Right then I went to go fetch my mother. My mother ran out and stood still waiting for some news. Mr Finch took a minute and stared at the floor, looked at my mother and spoke ?he was shot?. She fell to the floor, weak, bursting into tears with no one to say things will be alright. ...read more.