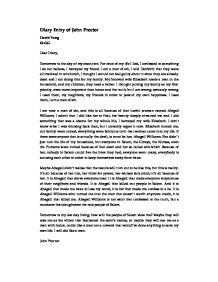 Diary Entry of John Proctor. Dear Diary, Tomorrow is the day of my execution. For once of my life I lied

Diary Entry of John Proctor David Yang 12 GG Dear Diary, Tomorrow is the day of my execution. For once of my life I lied, I confessed to something I do not believe, I betrayed my friend. I am a man of sin, I told Danforth that they were all involved in witchcraft, I thought I would not feel guilty about it since they are already dead and I am doing this for my family. My beloved wife Elizabeth needs a man in the household, and my children, they need a father. I thought putting my family as my first priority, even more important than honor and the truth; but I am wrong, seriously wrong. ...read more.

I don't know what I was thinking back than, but I certainly regret it now. Elizabeth trusted me, our family were united, everything were fabulous until that woman came into my life. If there were anyone that is actually the devil, is must be her, Abagail Williams. She didn't just ruin the life of my household, but everyone in Salem, the Coreys, the Nurses, even the Putnams were ruined because of that devil and her so called witchcraft. Because of her, nobody in Salem could live the lives they had, everyone went crazy, everybody is accusing each other in order to keep themselves away from harm. ...read more.

And it is Abagail that made me have to lose my word, it is her that made me confess to a lie. It is Abagail Williams who turned me into the man that doesn't worth anymore credit, it is Abagail that killed me. Abagail Williams is not saint that confessed to the truth, but a murderer that slaughtered the nice people of Salem. Tomorrow is my last day living, how will the people of Salem view me? Maybe they will take me as the villian that blackened the saint's names, or maybe they will see me as a man with honor, to die like a man not a coward that would've done anything to save my own life. I will die like a man. John Proctor. ...read more.