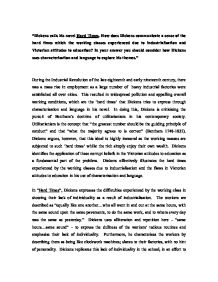 Dickens calls his novel Hard Times. How does Dickens communicate a sense of the hard times which the working classes experienced due to industrialisation and Victorian attitudes to education? In your answer you should consider how Dickens uses characteris

"Dickens calls his novel Hard Times. How does Dickens communicate a sense of the hard times which the working classes experienced due to industrialisation and Victorian attitudes to education? In your answer you should consider how Dickens uses characterisation and language to explore his themes." During the Industrial Revolution of the late eighteenth and early nineteenth century, there was a mass rise in employment as a large number of heavy industrial factories were established all over cities. This resulted in widespread pollution and appalling overall working conditions, which are the 'hard times' that Dickens tries to express through characterisation and language in his novel. In doing this, Dickens is criticising the pursuit of Bentham's doctrine of utilitarianism in his contemporary society. Utilitarianism is the concept that "the greatest number should be the guiding principle of conduct" and that "what the majority agrees to is correct" (Bentham 1748-1832). Dickens argues, however, that this ideal is highly immoral as the working masses are subjected to such 'hard times' whilst the rich simply enjoy their own wealth. Dickens identifies the application of these corrupt beliefs in the Victorian attitudes to education as a fundamental part of the problem. Dickens effectively illustrates the hard times experienced by the working classes due to industrialisation and the flaws in Victorian attitudes to education in his use of characterisation and language. ...read more.

Dickens reveals how only work was ever seen thriving in Coketown; social activities never took place in Coketown. Since the working class were simply expected to work, they were given hardly any leisure hours. Similarly, creativity is not allowed to enter the classroom, "Why, then, you are not to see anywhere what you don't see in fact; you are not to have anywhere that you don't have in fact. What is called Taste is only another name for Fact". The children are forced to have no imagination and no creativity as a result of the industrial and utilitarian belief of the society. They even revoke the idea of "taste", of imagination and change this to "fact" such that the children are forced to have no creativity whatsoever. This shows how Victorian education is simply preparing them for the working world, where they would be adequately prepared for the lack of creativity. By showing the lack of creativity and leisure hours due to industrialisation, Dickens is showing another example of the hard times industrialisation has caused and is criticising how utilitarianism shapes the children into the same lifeless mould. In "Hard Times", Dickens generates a sense of the hard times felt by working classes through the poor working and learning conditions. ...read more.

In his novel "Hard Times", Dickens effectively communicates a sense of the hard times the working class experienced through industrialisation and utilitarianism by using specific language and characterisation. The factory workers are dehumanised and considered to be machines. The removal of their individual identities echoes the monotony and hardship of their daily routine. By spreading the removal of individuality to even the school children, Dickens conveys how the immoral beliefs in industrialisation are embodied in the Victorian attitude to education. Furthermore, the extraction of creativity from the children and the lack of leisure hours for factory workers show the hard work commanded by the society, which created such hard times. This is echoed in the sense of entrapment in these hard times for the children and the workers. Indeed, Dickens shows the difficulty of being released from the entrapment of these hard times in a society so fixed on an immoral and misguided pursuit of utilitarianism, which has replaced morals and religion with the worship and idolisation of industry and facts. The high level of pollution in Coketown further suggests the harsh conditions and effects of over industrialisation. Overall, Charles Dickens successfully and convincingly communicates a sense of the hard times which the working class experienced due to the industrialisation and the Victorian attitudes to education, by making specific use of language and characterisation. ...read more.