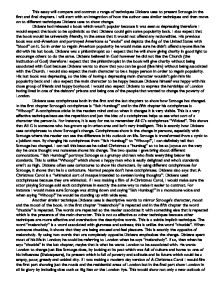 This essay will compare and contrast a range of techniques Dickens uses to present Scrooge in the first and final chapters. I will start with an integration of how the author uses similar techniques and then move on to different techniques Dickens uses to show change. Dickens had released a book which wasn't popular because it was seen as depressing therefore I would expect the book to be optimistic so that Dickens could gain some popularity back. I also expect that the book would be universally friendly, in the sense that it would not offend any nationalities. His previous book was anti-American and portrayed Americans as "snobs" and depicts the flag of the United States with "blood" on it. So in order to regain American popularity he would make sure he didn't offend anyone like he did with his last book. Dickens was a philanthropist so I expect that he will show giving charity in good light to encourage others to do the same. Dickens believed in God however he did not like the Church (the institution of God) therefore I expect that the philanthropist in the book will give charity without being associated with God because Dickens wants to show that you can be good (like him) without being associated with the Church. I would also expect the main character to be a happy person in order to regain popularity. His last book was depressing, so the idea of having a depressing main character wouldn't gain him his popularity back and I also expect the main character to be happy because Dickens himself was happy with his close group of friends and happy boyhood. ...read more.

however I would never show Scrooge in the rain or cloudy weather, this would put forward the idea that at heart Scrooge is good. This would also reinforce Dickens idea that no matter how far down the "nasty" side you are, you can change because there is always a bit of good in you. Another technique that is used to show Scrooge's change in the first and final chapter is people's reactions and attitudes toward him while he is walking down the street. In the first chapter, while Scrooge is walking down the road people are repulsed by him, in fact "no man, woman" or "child" dared to speak to him. In the last chapter, Scrooge is described as "irresistibly pleasant". By showing Scrooge doing the same thing (walking down the street) but people treating him differently, it gives the reader an idea of how to react to him. Scrooge has been turned from someone you run away from to someone who you can't help but stopping for conversation. This is very effective because humans tend to follow what a majority do and they also tend to follow someone if they are friends with them. The narrator appears to be a friendly person so we are more likely to listen to him than the spawn of Satan. The reader will then follow what the narrator thinks of Scrooge. Dickens is well known for having a close group of friends and family, so maybe by showing how attitudes can change in the street, Dickens is encouraging us to get a close group of friends (by being irresistibly pleasant in the street). ...read more.

In comparing and contrasting the different range of techniques used to show Scrooge's change I have found more similar (ones that have been used in both chapters) than different ones. I think this is because the use of opposites and being aware of what Scrooge was like in the past enables us to contrast and see how much Scrooge has really changed (which a fair amount). A Christmas Carol did match some of my expectations; it is universally friendly, in the fact that it doesn't offend any nationalities. In fact I think this was even an apology, Scrooge is a snob at the start and Dickens described Americans as "snobs" so by showing Scrooge's change maybe Dickens is saying America has changed from its uptight ways. It also matched my expectations in the fact that he did try to encourage others to be charitable and that they didn't have to be associated with God to be a good person. One thing that didn't match my expectations was that Scrooge was not so much of an optimistic man at the start however I agree with how Dickens showed the journey of change. This however was risky at the time seeing as chapters went for sale weekly or monthly to make it cheaper for poor people to buy the novel, so if they see a depressing main character they may not invest in the idea. Dickens also showed his good boyhood by referring to his childhood and showing that Scrooge also had a good childhood. This book was overall more optimistic which is what I expected (in order for Dickens to get his popularity back). ...read more.