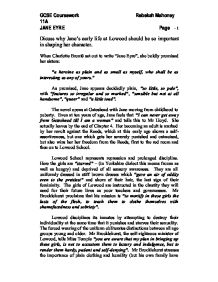 Dicuss why Jane's early life at Lowood should be so important in shaping her character.

Dicuss why Jane's early life at Lowood should be so important in shaping her character. When Charlotte Bront� set out to write "Jane Eyre", she boldly promised her sisters: "a heroine as plain and as small as myself, who shall be as interesting as any of yours." As promised, Jane appears decidedly plain, "so little, so pale", with "features so irregular and so marked", "sensible but not at all handsome", "queer" and "a little toad". The novel opens at Gateshead with Jane moving from childhood to puberty. Even at ten years of age, Jane feels that "I can never get away from Gateshead till I am a woman" and tells this to Mr Lloyd. She actually leaves by the end of Chapter 4. Her becoming an adult is marked by her revolt against the Reeds, which at this early age shows a self-assertiveness, but one which gets her severely punished and ostracised, but also wins her her freedom from the Reeds, first to the red room and then on to Lowood School. Lowood School represents repression and prolonged discipline. Here the girls are "starved" - (in Yorkshire dialect this means frozen as well as hungry) and deprived of all sensory awareness. They are all uniformly dressed in stiff brown dresses which "gave an air of oddity even to the prettiest" and shorn of their hair, the last sign of their femininity. ...read more.

Helen presents her with an alternative Christian view in that we should bear any amount of suffering in this world in order to benefit in the afterlife, and "love your enemies". Jane on the other hand, does not accept things merely as they are and wishes to explore and understand them, demonstrating her independence of mind. Jane's own sense of self allows her to think for herself and not slavishly adhere to the opinions of others. One of the aspects of Helen Burns' saintliness is that she seems to have accepted this idea without resentment. She accepts punishment from Miss Scatcherd in a way that amazes Jane. Jane cannot sympathise with it, although she says she knows Helen may be right and she herself may be wrong. She does not ponder on the matter. Jane wants to take time to reflect on, and gain inspiration from, her friend's humility. Helen's tolerance taught Jane to endure the same criticism from Blanche when she attempted to humiliate her in front of Rochester. Jane does not respond which would have satisfied Ingram's intention to provoke and leave herself more open to ridicule. This problem between what is natural and what is dutiful, recurs throughout the novel. When Jane knows that Rochester loves her, she is in a state of sublime happiness. ...read more.

From the day Miss Temple left, Jane was no longer the same. The "settled feeling" had gone, the feeling that had made Lowood "a home". Jane continues, "I was quiet. I believed I was content. To the eyes of others.....I appeared a disciplined and subdued character". That same evening Jane's attitude had changed and she felt that ......."a varied field of hopes and fears, of sensations and excitements, awaited those who had the courage to go forth.......to seek real knowledge of life amidst its perils". Each new setting brings on more challenges and more negative feelings to Jane. As she moves through these bad experiences, she learns how better to deal with them and ultimately, she is satisfied. In her arrival at Ferndean, her salvation, Jane finally breaks away from her restraints and has the freedom she always wanted. Lowood presents Jane with contrasting views of religious experience (those of Brocklehurst and Helen Burns). She gained more of a religious understanding from Helen than she did from Brocklehurst as she could not put her faith in a hypocrite. However she could never quite shake his persuasions e.g. her wedding attire. The novel ends happily. Jane has proven her independence and has been able to marry the man she loves. She has earned her happiness without violating her integrity or her conscience and both her longing for love and her self-fulfilment have been realised. ...read more.