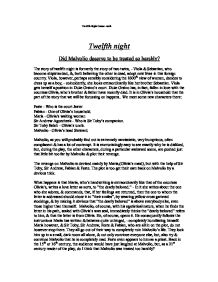 DID MALVOLIO DESERVE TO BE TREATED SO HARSHLY?

Twelfth night Did Malvolio deserve to be treated so harshly? The story of twelfth night is formerly the story of two twins, - Viola & Sebastian, who become shipwrecked, &, both believing the other is dead, adopt new lives in this foreign country. Viola, however, perhaps sensibly considering the 1600th view of women, decides to dress up as a boy, - coincidently, she looks extraordinarily like her brother Sebastian. Viola gets herself a position in Duke Orsino's court. Duke Orsino has, in fact, fallen in love with the countess Olivia, who's brother & father have recently died. It is in Olivia's household that the part of the story that we will be focussing on happens.. We meet some new characters there: Feste - Who is the court Jester Fabian - One of Olivia's household. Maria - Olivia's waiting woman Sir Andrew Aguecheek - Who is Sir Toby's companion. Sir Toby Belch - Olivia's uncle. Malvolio - Olivia's head Steward. Malvolio, as you will probably find out is extremely narcissistic, very bumptious, often complacent & has a lot of contempt. It is excruciatingly easy to see exactly why he is disliked, but, during the play, the other characters, during a particular awkward scene, are pushed just that little bit too far by Malvolio & plot their revenge. The revenge on Malvolio is devised mainly by Maria,(Olivia's maid), but with the help of Sir Toby, Sir Andrew, Fabian & Feste. The plot is too get their own back on Malvolio by a devious trick. What happens is that Maria, who's handwriting is extraordinarily like that of the countess Olivia's, writes a love letter as sorts, to "the dearly beloved." - In it she writes about the one who she adores, & commands, that, if her feelings are returned, then the one to whom the letter is addressed should show it in "their smiles", by wearing yellow cross gartered stockings, & by making it obvious that "the dearly beloved" is above everybody else, even those higher than themself. ...read more.

He has seen no sign of Olivia having any interest in him whatsoever, & already, he is narcissistic enough to believe that he could ever end up being her husband. At last he finds the letter. Here, in some ways, it can be argued that Malvolio deserves any fate that comes to him as a result of what the letter may contain as he never should have opened it in the first place. It is addressed to "to the unknown beloved, this, & my good wishes" - The letter is not addressed to him, it doesn't say his name, there is no indication whatsoever that it is even meant for Malvolio, & yet, still, he automatically assumes it is meant for him. If he wasn't so contemptuous, then he never would have opened the letter, & he wouldn't be in the situation he gets himself into at the end of the play. The letter, also, has Olivia's wax seal on the back of it, &, it is in what Malvolio believes to be her handwriting. If he was true to his job, & if he were to do the right thing, he would automatically go & hand the letter in, - Like he should do. Unfortunately, he does not. Fabian comments on the letter: "What dish o' poison has she dressed him!" - He is trying to say that Malvolio walks straight into the trap they had set him, but, if he hadn't been so arrogant, it never would have worked. The letter reads "Some are born great, some achieve greatness, & others have greatness thrust upon 'em" - Malvolio of course, takes this an indication that he will become "Count Malvolio" - Anyone else, would not believe anything so ludicrous. The letter orders Malvolio to "Be opposite with a kinsman, surly with servants; let thy tongue tang arguments of state; put thyself into the trick of singularity......remember who commended thy yellow stockings & wished to see thee ever cross gartered" - The letters ...read more.

He is a lovable character, whom you feel incredibly sorry for, & the director has made it so you feel more empathy towards Malvolio, - connecting you more to the play. I think that he, at least, believed that Malvolio was done wrong. After looking at both viewpoints on malvolio however, I'm still not exactly sure what I believe. I do believe that MAlvolio was far too arrogant & contemptuous & really did need somebody to bring him back down to earth. I believe he did need a lesson teaching him, but I'm not sure Sir Toby & Maria went about it the right way, &, even if they did, - I think it went too far! At first, I think the letter was an amusing joke, gulling Malvolio into self humiliation, but think, after they nearly convinced him he was mad, & locked him up, I think it went way too far! I don't think you should be able to just play with people's feelings that way. I am sympathetic to Malvolio & believe it went too far, but on the other hand, I do, of course realise that anybody in the 15th or 16th century, at the time when the play was written wouldn't have had as much sympathy. They would have loathed Malvolio's puritanical ways, - after all, the puritans did go on to get Christmas cancelled! - The idea of anybody being able to convince another that they were mad would have made them laugh out loud & they would have found it extremely amusing. In conclusion, I believe that Malvolio was treated too harshly, but I do, of course, see all the different points of view, & believe that he was extremely contemptuous & self righteous, & for that, he needed bringing back down to earth! ?? ?? ?? ?? Twelfth Night Course-work Kathy Raison Twelfth Night Course-work 4T ...read more.