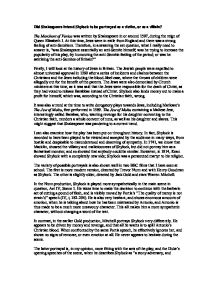 Did Shakespeare intend Shylock to be portrayed as a victim, or as a villain?

Did Shakespeare intend Shylock to be portrayed as a victim, or as a villain? The Merchant of Venice was written by Shakespeare in or around 1597, during the reign of Queen Elizabeth I. At this time, Jews were in exile from England and there was a strong feeling of anti-Semitism. Therefore, in answering the set question, what I really need to answer is, "was Shakespeare essentially an anti-Semite himself; was he trying to increase the popularity of his play, by humouring the anti-Semitic feeling of the period; or was he satirizing the anti-Semites of Britain?" Firstly, I will look at the history of Jews in Britain. The Jewish people were expelled to almost universal approval in 1290 after a series of incidents and clashes between the Christians and the Jews including the blood-libel case, where the throats of children were allegedly cut for the benefit of the parents. The Jews were also demonised by Church ministers at this time, as it was said that the Jews were responsible for the death of Christ, as they had voted to release Barabbas instead of Christ. Shylock also lends money out to make a profit for himself, which was, according to the Christian faith, wrong. It was also a trend at the time to write derogatory plays towards Jews, including Marlowe's The Jew of Malta, first performed in 1589. ...read more.

The latter portrayal is, in my opinion, more fitting with the acts of the play, and the Duke's opening speeches of the scene, when he describes Shylock as "a stony adversary, and inhuman wretch/ Incapable of pity, void and empty/ From any dram of mercy." (IV, i, 4-6), meaning that he is free of any mercy, of normal human feelings. However, this is just my opinion and it is conceivable that the Duke himself is an anti-Semite, and therefore cannot understand Shylock. Shylock in the text also appears to be, at least partly, driven by money. When his daughter, Jessica, leaves home, he not only cries for her, but he cries more for the money that she has stolen from him. As Solanio quotes "My daughter! O my ducats! ... A sealed bag, two sealed bags of ducats," (II, 9, 15-18). Money is considered in some of society to be "the root of all evil", and is probably in fact the principal reason that Shylock wants to harm Antonio in Act IV, Scene 1. Even though Shylock protests that the only reason he is carrying through his bond is for the law "I crave the law" and his religion "By the Holy Sabbath I have sworn...". He also uses the analogy of a rat pest with Antonio. This suggests that Antonio may be harming him, or at least annoying him, and so he wants to be rid of Antonio for good. ...read more.

However, it may be that Antonio is not quite as cruel as it seems. Around this time, it was said that those who were not of the Christian faith, could not go to heaven or hell, but would rest in nothingness for eternity. In this way, it is conceivable that Shakespeare was taking pity and giving mercy to Shylock at this point. Another question I should ask is why was the play set in Venice, and not in London or similar. There are certainly a few possible answers to this. Firstly, Venice would seem exotic, and the name would attract people to the theatre. As well as this, there was a huge variety of cultures represented in Venice, including many money-lending Jews. It is also likely that it was set in Venice, so that Shakespeare could distance his audience from the racist and anti-Semitic actions of the Christians in Venice, and therefore they could not take any offence on the subject. In that way, it is possible that Shakespeare was in fact satirizing the anti-Semitic feeling. After looking at all the evidence, I have decided that the most likely answer to the question is that Shakespeare did in fact intend Shylock to be portrayed as a villain, because historically this is most likely, and the bulk of the textual evidence suggests it. However, this is not to say that Shakespeare was himself an anti-Semite; he was probably merely humouring the feeling of the period, as a commercial playwright, comparable to a writer of today's Hollywood films. ...read more.