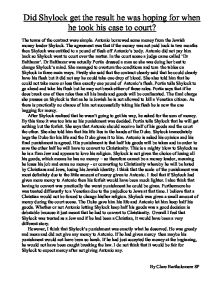 Did Shylock get the result he was hoping for when he took his case to court? The terms of the contract were simple. Antonio borrowed some money from the Jewish money lender Shylock. The agreement was that if the money was not paid back in two months then Shylock was entitled to a pound of flesh off Antonio's body. Antonio did not pay him back so Shylock went to court over the matter. In the court scene a judge came called 'Dr Balthazar'. Dr Balthazar was actually Portia dressed a man so she was doing her best to change Shylock's mind. She managed to overturn the conditions and turn the tables on Shylock in three main ways. ...read more.

By this time it was too late so his punishment was decided. Portia tells Shylock that he will get nothing but the forfeit. She says that Antonio should receive half of his goods and the court the other. She also told him that his life lies in the hands of the Duke. Shylock immediately begs the Duke for his life and the Duke gives it to him. Antonio is asked his opinion and his final punishment is agreed. His punishment is that half his goods will be taken and in order to save the other half he will have to convert to Christianity. This is a mighty blow to Shylock as he is a firm Jew and appears to love his religion. ...read more.

The Duke gave him his life and Antonio let him keep half his goods. Whether or not Antonio letting Shylock keep half his goods was a good decision is debatable because it just meant that he had to convert to Christianity. Overall I feel that Shylock was treated as a Jew and if he had been a Christian, it would have been a very different story. However, I think that Shylock's punishment was exactly what he deserved. He was greedy and mean and did not give any mercy to Antonio. If he had given mercy then maybe his punishment would not have been so harsh. If he had just accepted the money at the beginning, he would not have been caught breaking the law. I do not think that it would be fair for Shylock to expect mercy after not giving Antonio any. By Clare Bartholomew 8P ...read more.

The candidateâ€™s response to the question is reasonably extensive. They discuss the court scene in detail as well as mentioning ShylockÃ¢â‚¬â„¢s desire to withhold the bond and his unhappiness when this is denied. However their response is not very explicit, ...

The candidateâ€™s response to the question is reasonably extensive. They discuss the court scene in detail as well as mentioning ShylockÃ¢â‚¬â„¢s desire to withhold the bond and his unhappiness when this is denied. However their response is not very explicit, which could be improved by concluding the essay with a direct answer to the set question.

For the most part the candidate simply retells the story and s/he seems to struggle to break away from this habit. It is often necessarily to discuss certain aspects of the storyline but it is pointless to retell the story word for word. When writing this type of essay you should try to discuss your own ideas and opinions. For example when discussing the court scene, why do you think Shylock insists on his bond, when Bassanio offers to pay him twice the original loan? Why is he so obsessive? You should use quotations to back up your opinions and discuss the characters thoughts and feelings. On a positive note the candidate does attempt to relate to Shylock as a character and tries to discuss his feelings. However in general their analysis is weak and the essay has very few quotations from the play. In addition the candidate could have achieved a higher grade by undergoing independent research, this kind of additional information shows your interest in the subject and makes the essay more exciting to read. In this case it would have been appropriate to discuss the time in which the play was written, which could lead to descriptions on how a court trial would take place during this time. You could also discuss how Shakespeare would have presented this scene, how would he have made it look and feel like a court from the audiences perspective. Finally there is no clear conclusion. A conclusion should answer the initial question, summarise your key points and ideas and include your personal opinions. This is important as it brings the essay to a close and gives you a chance to leave the reader with a good impression.

I feel that the quality of written communication in this essay is poor, and the vocabulary used is fairly simple. The candidate has not mentioned any of the technical terms that I would expect to be discussed at this level, for example the use of metaphors and similes. However there are no real problems with spelling or grammar. Overall this is a reasonably poor example of the type of essay I would expect at GCSE, however the candidate was not at GCSE level when this was written. If improved upon this could easily achieve a good grade.