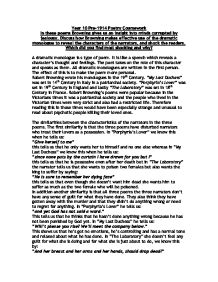 Year 10 Pre-1914 Poetry Coursework In these poems Browning gives us an insight into minds corrupted by jealousy. Discuss how Browning makes effective use of the dramatic monologue to reveal the characters of the narrators, and shock the readers. Which did you find most shocking and why? A dramatic monologue is s type of poem. It is like a speech which reveals a character's thought and feelings. The poet takes on the role of this character and speaks as them. All dramatic monologues are written in the first person. The effect of this is to make the poem more personal. Robert Browning wrote his monologues in the 19th Century. "My Last Duchess" was set in 14th Century in Italy in a patriarchal society. "Porphyria's Lover" was set in 19th Century in England and lastly "The Laboratory" was set in 18th Century in France. Robert Browning's poems were popular because in the Victorians times it was a patriarchal society and the people who lived in the Victorian times were very strict and also had a restricted life. Therefore reading this in those times would have been especially strange and unusual to read about psychotic people killing their loved ones. ...read more.

this tells us that she thinks that revenge tastes sweet. Another difference is that the woman in "Porphyria's Lover" is more sexually active and makes the first move, we can see this when the narrator tells us: "She put my arm around her waist, And made her smooth white shoulder bare" this tells us that she appears seductive and she's aware of her power. Where as in "My Last Duchess" the Duchess was much more modest and faithful, we can see this when the Duke tells us: "She had a heart-how shall I say?" this tells us that the Duchess was loyal to the Duke and did not always appear sexually active towards him or others. Another difference is that in all two of the poems "Porphyria's Lover" and "The Laboratory" they both have a reason for jealousy were as in "My Last Duchess" he does not have a reason to be jealous. In "Porphyria's Lover" the lover had a reason to be jealous because she had another man, we know this by: "one so pale for love of her" this tells us that she had another lover whilst she was with this lover and also in "The Laboratory" the narrator tells us that the ...read more.

Lastly, in "The Laboratory" I feel that the narrator is psychotic because of the way the death of the two women are described and how she wants their death to be, we can see this when she says: "And her breast and her arms and her hands, should drop dead!" In conclusion I think that Browning used dramatic monologues to explore these three characters because this is the poem in which the poet takes on the role of the narrator and speaks of them. I don't think that the poem would have been powerful in third person because using first person makes the poem more personal and it makes the reader think that the poem is talking to the reader himself. I think that the most shocking poem would have been "Porphyria's Lover" because in this poem the narrator describes harshly about the death of the lover and how he killed the lover with her hair and used this as a weapon and also I feel it is quite shocking when he tries to reassure the reader that the victim did not feel any pain. ...read more.