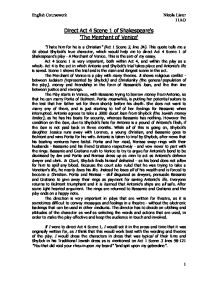 Direct Act 4 Scene 1 of Shakespeare's - 'The Merchant of Venice'

Direct Act 4 Scene 1 of Shakespeare's 'The Merchant of Venice' "I hate him for he is a Christian" (Act 1 Scene 3, line 34). This quote tells me a lot about Shylock's true character, which would help me to direct Act 4 Scene 1 of Shakespeare's play - A Merchant of Venice. This is the aim of my essay. Act 4 Scene 1 is very important, both within Act 4, and within the play as a whole. Act 4 is the act in which Antonio and Shylock's trial takes place and Antonio's life is saved. Scene 1 shows the trial and is the main and longest scene in the act. The Merchant of Venice is a play with many themes. It shows religious conflict - between Judaism (represented by Shylock) and Christianity (the general population of the play), money and friendship in the form of Bassanio's loan, and the thin line between justice and revenge. The Play starts in Venice, with Bassanio trying to borrow money from Antonio, so that he can marry Portia of Belmont. Portia meanwhile, is putting her potential suitors to the test that her father set for them shortly before his death. She does not want to marry any of them, and is just starting to tell of her feelings for Bassanio when interrupted. Antonio agrees to take a 3000 ducat loan from Shylock (the Jewish money lender), as he has his boats for security, whereas Bassanio has nothing. However the condition on the loan, due to Shylock's hate for Antonio is a pound of Antonio's flesh, if the loan is not paid back in three months. ...read more.

He is very sure that he wants his bond and refuses to show any mercy at all - even saying that he would not take 36,000 ducats instead of the 3000 lent out, in replacement of his bond. I would have him saying this very slowly and loudly, as though he feels he is saying it to deaf and stupid children, and also to show how sure and confident he is that he is right. I would have him sitting, still and calm, as though he is sure, and not at all nervous or faltering over his decision. This is because his words are very strong and solid, offering him no way to back out of this speech later in the trial, and therefore insinuating that he feels there would be no need for this. This is one of the few speeches when he shows his true natural feelings, the other being his main speech aside in Act 1 Scene 3, about his first thoughts of Antonio. "How like a fawning publican he looks! I hate him for he is a Christian; But more, for it's low simplicity He lends out money gratis, and brings down The rate of usance here with us in Venice. If I can catch him once upon the hip, I will feed fat the ancient grudge I bear him. He hates our sacred nation, and he rails Even there where merchants most do congregate On me, my bargains, and my well won thrift Which he calls interest. Cursed be my tribe If I forgive him!" One of the Dukes few important lines is line 88: "How shoult thou hope for mercy, rendering none?" ...read more.

Many Characters change and develop in this scene, and this, linked strongly with the height of tension and dramatic climax in the scene is what makes it so important. I have tried to show and emphasise the many changes and turning points of the scene in my direction of it. This is very important especially as this particular scene is the one most likely to make an impact on the audiences' views and feelings, due to its importance within the play. I think that the act is very well written, as it is a very good and subtle mix of a fictional storyline and real morals and issues of both Shakespeare's time and the present day. It is also written so that the director can use a lot of free running creativity and has a lot of influence on the play due to the lack of stage directions. Lines 70-83 of Act 4 Scene 1 are particularly open to directorial interpretation. "I pray you think you question with the Jew. You may as well go stand upon the beach And bid the main flood bate his usual height; You may as well use question with the wolf Why he hath made the ewe bleat for the lamb; You may as well forbid the mountain pines To wag their high tops and to make no noise When they are fretten with the gusts of heaven; You may as well do anything most hard As seek to soften that - than which what's harder? - His Jewish heart. Therefore I do beseech you Make no moe offers, use no farther means, But with all brief and plain conveniency Let me have judgement, and the Jew his will." English Coursework Nicola Lister 11AO 1 ...read more.