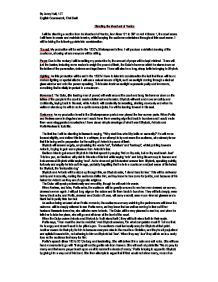 Directing the Merchant of Venice.

Directing the Merchant of Venice I will be directing a section from he Merchant of Venice, from lines 121 to 397 on Act 4 Scene 1, the court scene. I will have to create and maintain tension, whilst keeping the audience entertained throughout this court scene. I will be taking the following points into consideration: The set: My production will be set in the 1500's, Shakespeare's time. I will produce a detailed drawing of the courtroom, showing where everyone will be sitting. Props: Due to the century I will be setting my production in, the amount of props will be kept minimal. There will just the basics, including some scales to weigh the pound of flesh, the Duke's hammer which he slams down on the tables of the prosecution, defence and legal teams. There will also be a long, sharp knife belonging to Shylock. Lighting: As this production will be set in the 1500's I have to take into consideration the fact that there will be no modern lighting or special effects. I will use a natural source of light, such as sunlight coming through a stained glass window and onto the person speaking. This is also ironic as sunlight represents purity and innocence, something that is vitally important in a courtroom. Movement: The Duke, (the leading man of power) ...read more.

Portia says, 'Then must the Jew be merciful.' And Shylock answers, 'On what compulsion must I? Tell me that. He is angry and doesn't want to be pitied upon. The audience must feel really sorry for Shylock at that point. Another reason for their pity for him is because everyone else in the court is a Christian, and they're all prejudiced and spiteful towards him, not referring to him as Shylock but 'Jew'. When they say 'Jew' they will do so in a nasty tone so the audience feel sorry for him. Portia's speech (lines 180 to 201) is long and fascinating. She will deliver it in a calm and soft voice. She will use hand movements to go with 'It droppeth as the gentle rain from heaven. She will rush at points like 'We do pray for mercy and that same prayer teach upon us all to render the deeds of mercy.' Portia is trying to appeal to Shylock by giving him a way out of his bond. She then attempts to argue that if God would not show mercy, none of us would be granted an opportunity for salvation. She implies to the Lords Prayer, which a Jew may not necessarily know. This speech will totally inspire and touch the audience. After hearing this they will probably respect her views more, although they may feel that her punishment towards Shylock at the end of the play is a little harsh. ...read more.

The whole court will burst into smiles, sighs of relief and even the Duke, a fellow Christian, will be happy for Antonio. The audience will sympathise for Shylock, as he will no longer be smiling but frowning. Even more so when Portia stops him, reminding him of the penalty that non-citizens face when they threaten the life of a Venetian. In such a case, Portia states, half of Shylock's property would go to the state, while the other half would go to the offended party- Antonio. Portia orders Shylock to beg for the Duke's mercy. The Duke declares that Shylock's life will be spared and demands only a fine of half Shylock's estate. Antonio offers to return his share of Shylock's estate, on the condition that Shylock converts to Christianity and gives all his goods to Jessica and Lorenzo upon his death. Shylock departs, saying simply, "I am not well" This change has to be very harsh on Shylock and his spirits have to change so suddenly so everyone feels sorry for him. He exits feeling a little better that at least he has half of his goods left, and has been spared his life, but has lost his religion, his ability to practice his profession, his daughter, his servant and a ring given to him by his dead wife. Audiences cannot help but view Shylock as a victim. He has become a tragic figure in a comedy that has no place for a character so complex. By Jenny Hall, 10T English Coursework, First Draft ...read more.