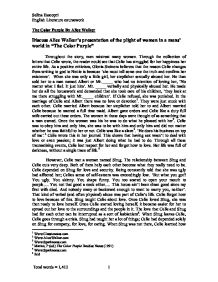 Discuss Alice Walker's presentation of the plight of women in a mans' world in &quot;The Color Purple&quot;.

The Color Purple By Alice Walker Discuss Alice Walker's presentation of the plight of women in a mans' world in "The Color Purple" Throughout the story, men mistreat many women. Through the collection of letters that Celie wrote, the reader could see that Celie has struggled for her happiness her entire life. As a positive criticism, Gloria Steinem believes that the reason Celie changes from writing to god to Nettie is because 'she must tell some one the truth and confirm her existence'. When she was only a little girl, her stepfather sexually abused her. He than sold her to a man named Albert or Mr._____ who had no intention of loving her, 'No matter what I feel. It just him'. Mr. _____ verbally and physically abused her. He made her do all the housework and demanded that she took care of his children, 'they look at me there struggling with Mr._____ children'. If Celie refused, she was punished. In the marriage of Celie and Albert there was no love or devotion1. They were just stuck with each other. Celie married Albert because her stepfather told her to and Albert married Celie because he wanted a full time maid. Albert gave orders and Celie like a duty full wife carried out these orders. The women in those days were thought of as something that a man owned. ...read more.

He also added that it is through Celie's awareness of her right to the passion, creativity, and satisfaction possibly in life that she empowers herself. Another character presented by Alice Walker is Sofia. Sofia is portrayed as a strong woman. She too is, insulted, beaten and underestimated, she is willing to change the system and change the image of black women that American black and white men possess. She wants to change the system but the society breaks her7. Sofia is a radical woman, who would do anything to be treated equally with the rest of the world8. Sofia is discriminated against by Harpo, who is taught by Mr._____, and he believes that men are superior, that women exist in this world to serve the males and to have babies, and also they serve the use of being beaten, when something troubles them or simply because they are women and there wives. 'Harpo ast his daddy why he beat me. Mr._____ say, cause she my wife'. Mr._____ says this to convince his son that women serve no use other that work, have babies and be beaten. Harpo, following his father's example, goes on to beat Sofia. But Sofia's response is unexpected. Harpo thought Sofia was going to act like Celie and do what she was told to do, but this strong woman, beat Harpo, who is a weak character. ...read more.

On the other hand we have Mr. _____ whose image goes from bad in the beginning of the novel, to good towards the end. In the beginning Mr. _____ is a horrible husband who looks at Celie in the same way as her stepfather did. Harpo is another male character whose male image changes throughout the novel. Women bond with each other to protect one another. For example the time Kate defends Celie and orders Harpo to 'git that bucket and bring it back full' this indicates how women defend Celie as oppose to men who abuse her.10 Watkins illustrates how 'Celie frees her husbands repressive control bolstered by her contacts with other women and by her affection for her younger sister.11 As a result by helping each other through struggles and hard ship, also by being companions to each other, Alice Walker has shown that women can overcome all obstacles and can fight to be equal in the world of men. We see the theme of sisterhood reoccurring between the women throughout the novel. 1 Www.Classicnotes.com 2 Www.AliceWalker.com 3 Www.Sparknotes.com 4 Marian, P (ed.) The Color Purple Brodies Notes (1991) 5 Www.Sparknotes.com 6 ibid 7 Www.ClassicNotes.com 8 Walker, A. The Color Purple The women's press (1983) 9 Www. Sisterspace/sisterhood/Colorpurple.com 10 Www.Classicnotes.com 11 ibid Selina Esscopri English Literature coursework 1 Total words = 1,412 ...read more.