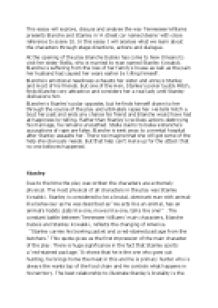 Discuss and analyse the way Tennessee Williams presents Blanche and Stanley in A street car named desire with close reference to scene 10.

﻿This essay will explore, discuss and analyse the way Tennessee Williams presents Blanche and Stanley in ?A street car named desire? with close reference to scene 10. In this essay I will analyse what we learn about the characters through stage directions, actions and dialogue. At the opening of the play Blanche DuBois has come to New Orleans to visit her sister Stella, who is married to man named Stanley Kowalski. Blanche is suffering from the loss of her family's house as well as the pain her husband had caused her years earlier by killing himself. Blanche's emotional neediness exhausts her sister and annoys Stanley and most of his friends. But one of the men, Stanley's poker buddy Mitch, finds Blanche very attractive and considers her a real lady until Stanley disillusions him. Blanche is Stanley's polar opposite, but he finds himself drawn to her through the course of the play and ultimately rapes her. He tells mitch a bout her past and ends any chance his friend and Blanche would have had at happiness by telling. Rather than Stanley's reckless actions destroying his marriage, he remains unscathed. Stella claims to believe Blanche's accusations of rape are false. Blanche is sent away to a mental hospital after Stanley assaults her. ...read more.

Throughout the play, Blanche avoids appearing in direct, bright light, especially in front of her lover, Mitch. She also refuses to reveal her age, and it is clear that she avoids light in order to prevent him from seeing the reality of her fading beauty. In general, light also symbolizes the reality of Blanche?s past. She is haunted by the ghosts of what she has lost her first love, her purpose in life. Blanche covers the exposed light bulb in the Kowalski apartment with paper, and she refuses to go on dates with Mitch during the daytime . Mitch points out Blanche?s avoidance of light in Scene Nine, when he confronts her with the stories Stanley has told him of her past. Mitch then forces Blanche to stand under the direct light and tells her he doesn?t mind her age. Williams, portrays Blanche as an uncertain character who hides behind the skin of her outer beauty and who when is placed under the spotlight, she feels exposed to other people seeing her real identity. She feel strongly about light that she didn?t let Mitch who she loved to see her in the light as Mitch said ??It's dark in here I don't think I ever seen you in the light What it means is I've never had a real good look at you.?? There can be direct links ...read more.

Stanley rapes Blanche However, as Scene Ten begins, Stanley is on the verge of regaining his dominance. He has discovered details of Blanche's past that discredit her in Stella's eyes as well as putting an end to a potential marriage between Blanche and his friend Mitch. His victory over her influence is sealed when he gives her bus ticket back to her town and insists that she use it. He is also only hours away from becoming a father. His confidence in himself is palpable as the scene unfolds in the way he plays along with Blanche. he savagely unmasks her story as lies and Only as Blanche becomes more frantic and desperate does the idea of subduing Blanche sexually seem to enter his mind. His line: "Come to think of it-maybe you wouldn't be bad to interfere with" indicates the turn of his thoughts, but his last line, "We've had this date with each other from the beginning!" has the ring of a revelation. They are too different and their conflict has been too intense for it not to be resolved by some definite act of triumph. Stanley expresses his victory in a way that satisfies his male ego as well as being an appropriate response to Blanche's own subconscious desires she is physically and mentally destroyed. Only an overt act of domination like this could satisfy someone of Stanley's temperament. ...read more.