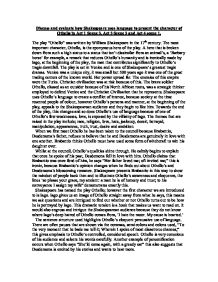 Discuss and evaluate how Shakespeare uses language to present the character of Othello in Act 1 Scene 3, Act 3 Scene 3 and Act 4 scene 1.

Discuss and evaluate how Shakespeare uses language to present the character of Othello in Act 1 Scene 3, Act 3 Scene 3 and Act 4 scene 1. The play "Othello" was written by William Shakespeare in the 17th century. The most important character, Othello, is the eponymous hero of the play. A hero that is broken down from such a high status to a status that isn't dissimilar from an animal's, a 'Barbary horse' for example, a remark that reduces Othello's humanity and is ironically made by Iago, at the beginning of the play, the man that contributes significantly to Othello's tragic downfall. The play is set in Venice and is one of Shakespeare's greatest tragic dramas. Venice was a unique city, it was small but 500 years ago it was one of the great trading centers of the known world. Her power spread far. The enemies of this empire were the Turks. Christian civilisation was at risk because of this. The brave soldier Othello, classed as an outsider because of his North African roots, was a strategic thinker employed to defend Venice and the Christian Civilisation that he represents. Shakespeare uses Othello's language to create a conflict of interest, because society at the time resented people of colour, however Othello's persona and manner, at the beginning of the play, appeals to the Shakespearean audience and they begin to like him. Towards the end of the play, this changes and so does Othello's use of language because of one of Othello's few weaknesses, love, is exposed by the villainy of Iago. ...read more.

Nevertheless, I think the duke does not let race effect his judgment and bases his verdict on what each party has to say, so he gives his blessing and sees nothing wrong with Othello's and Desdemona's relationship. 'Your son-in-law is far more fair than black' the Duke is telling Brabantio that Othello has done nothing that should raise suspicions and that if you were to judge him without prejudice, you would be more than happy to see your daughter marry Othello. I believe that Shakespeare is using this line to indicate to his audience the moral dilemma of the age that prejudgment precludes the truth. As Brabantio leaves the council he leaves Othello with a thought and that is, 'she has deceived her father, and may thee.' This is dramatic irony as it contributes to Othello's impending tragic breakdown by planting a seed of doubt in what becomes a fragile mind. The character, Iago, is used as a dramatic mechanism to help the plot along. He is clearly an extraordinarily intelligent man. He uses this intelligence to deceive, with the intention of getting what he wants. He says to Roderigo 'put money in thy purse' he wants money from Roderigo and repeats this over and over whilst promising Roderigo he will get him what he desires, which is Desdemona, Iago is cunning here because he has no intention of helping out Roderigo, but his actions later show Roderigo that he has tried his best for him, when really he hasn't. ...read more.

In this scene Othello is angry, scared, jealous and irrational, he delivers his language quickly in a speedy exchange with Iago. Othello has become Iago's puppet, he repeats Iago's words only louder and more vigorously. Iago says to Othello 'Will you think so?' Othello then replies 'Think so, Iago!' these questions raise doubt in Othello's mind. 'To kiss in private?', 'An unauthorized kiss.' The repetition here emphasises the kiss, the physical act that upsets Othello so much. Shakespeare uses Othello's language at this moment to suggest that this kiss would be against the laws of the state, the church and of marriage. More repetition is used, Iago says 'naked with her friend in bed' and Othello replies 'Naked in bed' incapable of thinking for himself now. Iago plants images in Othello's mind, these images torture Othello and strengthen his eagerness to think along these lines. Othello's constant questioning illustrates the loss of his mind. He has lost the ability to think for himself properly, he is no longer the commanding general we thought he was, he is now a weak fragile man lost in a sea of jealousy. The quick fire discussion Othello and Iago are having represents the battle within Othello's mind. In Act 1 Scene 3 Othello's language is lengthy, effortless and expressive, however this begins to deteriorate in Act 3 Scene 3 Othello becomes infuriated, yet now and again shows signs of staying in control. In Act 4 Scene 1 Othello's language has now become irrational, senseless and absurd. He becomes intent on destroying those he thinks have betrayed him. Joe Tonge ...read more.