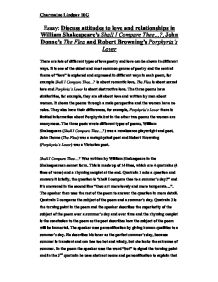 Discuss attitudes to love and relationships in William Shakespeares Shall I Compare Thee?, John Donnes The Flea and Robert Brownings Porphyrias Lover

Essay: Discuss attitudes to love and relationships in William Shakespeare's Shall I Compare Thee...?, John Donne's The Flea and Robert Browning's Porphyria's Lover There are lots of different types of love poetry and love can be shown in different ways. It is one of the oldest and most common genres of poetry and the central theme of "love" is explored and expressed in different ways in each poem, for example Shall I Compare Thee...? is about romantic love, The Flea is about sexual love and Porphria's Lover is about destructive love. The three poems have similarities, for example, they are all about love and written by men about women. It shows the poems through a male perspective and the women have no voice. They also have their differences, for example, Porphyria's Lover there is limited information about Porphyria but in the other two poems the women are anonymous. The three poets wrote different types of poems, William Shakespeare (Shall I Compare Thee...?) was a renaissance playwright and poet, John Donne (The Flea) was a metaphysical poet and Robert Browning (Porphyria's Lover) was a Victorian poet. ...read more.

In the next line he uses sexual imagery when he says "suck'd" and "sucks" and by saying "and in this flea, our two bloods mingled be" he means that they've already had sex inside the flea because in the 17th century the mingling of blood was like having sex. His lover tries to kill the flea and then he decides to use a religious argument. The speaker talks about their parents grudge "through parents grudge, and you, we're met" and he wants her to try and rebel against her parents wishes and have sex with him. At the end of the second stanza he says "though use you apt to kill me, let not that, self-murder added be, and sacrilege, three sins in killing three". The lover has tried to kill the flea and he is saying that in killing the flea, she has killed him, herself and the flea because their blood is in the flea. At the beginning of the third stanza, the lover has killed the flea and has "purpled thy nail, in blood of innocence?". If the blood of the flea is innocent, then he is also saying that their relationship is innocent. ...read more.

He then rearranges Porphyria's body into the position it was in earlier in the poem. He says "her darling wish would be heard" which was that the moment they shared would last forever. In the last few lines of the poem "And thus we sit together now, and all night long we have not stirred, And yet God has not said a word!" he begins to think God has sanctioned the murder because he has not reacted to it all night. The relationships in the poems have been presented differently but are all about love, explored in different ways. They were all written in a patriarchal society and you can tell because in all the poems the men had written about the women and they always had the last say. This was the attitude of a pre-19th century society where women weren't treated as equals by the men. In The Flea the male has the last word in the argument, Shall I Compare Thee...? The speaker shows patriarchy in the last few lines of the poem. Also, in Porphyria's lover, Porphyria seems to do all the housework when she arrives at the cottage. These poems are similar but are very different in their own ways. ?? ?? ?? ?? Charmaine Lindsay 10G ...read more.