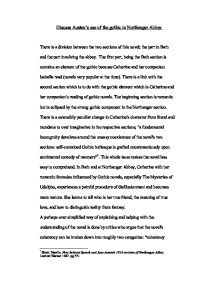 Discuss Austen's use of the gothic in Northanger Abbey

Discuss Austen's use of the gothic in Northanger Abbey There is a division between the two sections of this novel; the part in Bath and the part involving the abbey. The first part, being the Bath section is contains an element of the gothic because Catherine and her companion Isabella read (novels very popular at the time). There is a link with the second section which is to do with the gothic element which is Catherine and her companion's reading of gothic novels. The beginning section is romantic but is eclipsed by the strong gothic component in the Northanger section. There is a ostensibly peculiar change in Catherine's character from literal and mundane to over imaginative in the respective sections; "a fundamental incongruity devolves around the uneasy coexistence of the novel's two sections: self-contained Gothic burlesque is grafted unceremoniously upon sentimental comedy of manners"1. This whole issue makes the novel less easy to comprehend. In Bath and at Northanger Abbey, Catherine with her romantic fantasies influenced by Gothic novels, especially The Mysteries of Udolpho, experiences a painful procedure of disillusionment and becomes more mature. ...read more.

to which one's reading is restricted. Austen completely ridicules gothic literature through Catherine's thoughts concerning the Tilney's home at Northanger Abbey. The satire of conventional literature is ubiquitous throughout the novel and is not anticipated to be subtle to the obscure reader. Although our generation is would not have been her target audience, the reader can still recognise the contrast of both the conventional and satirical forms of literature. Northanger Abbey although a modern and pleasant place of residence is transformed into a creepy gothic castle with torture chambers where murders have occurred and people are kept prisoner. This is clearly a mockery of the gothic, which is mentioned several times throughout the novel and is finally humorously brought to life in Catherine's imagination. If Northanger Abbey was truly meant to be a gothic novel then the descriptions of the Tilney residence and Catherine's suspensions would certainly have been justified. However, due to the entertaining and satirical tone of the novel the gothic style of writing does not fit in and has no place in the story. ...read more.

We know that it was very popular in the time when Austen wrote the novel. Many critics believe that Henry Tilney is voice of the novel; teasing Catherine with gothic ideas, stories and fantasies In conclusion, it is evident that Austen wished to be unconventional in writing this novel and wanted the narrator to be the one to make the reader aware of the contrasts of conventional literature and "Northanger Abbey. The narrator and the method in which the story is told are the focus of the story. Although the narrator is not an actual character in the story her presence is known and her opinions are expressed and can be identified by the reader. Jane Austen provides her audience with an alternative form of literature by having a novel focus on how a story can be told as opposed to most novels which traditionally focus on the story itself. Cleverly, by using a likeable character that the implied reader can identify with and relate to, Austen is able to use this character as a model for her extraordinary comparison. 1 Shaw, Narelle. Free Indirect Speech and Jane Austen's 1816 revision of Northanger Abbey. London:Warner 1987. pg 571 2 http://ftp.cac.psu.edu/pub/courses/english/18C_Novel/northang.wp. 3 http://www.janeaustenba.org/self-deception.html 4 Austen, Jane. Northanger Abbey. London, Penguin Books. 1995 (pg 157) ...read more.