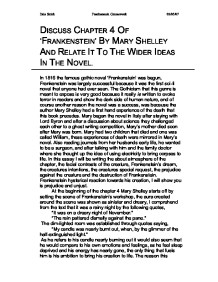 DISCUSS CHAPTER 4 OF 'FRANKENSTEIN' BY MARY SHELLEY AND RELATE IT TO THE WIDER IDEAS IN THE NOVEL. In 1816 the famous gothic novel 'Frankenstein' was begun, Frankenstein was largely successful because it was the first sci-fi novel that anyone had ever seen. The Gothicism that this genre is meant to expose is very good because it really is written to evoke terror in readers and show the dark side of human nature, and of course another reason the novel was a success, was because the author Mary Shelley had a first hand experience of the death that this book precedes. Mary began the novel in Italy after staying with Lord Byron and after a discussion about science they challenged each other to a ghost writing competition, Mary's mother died soon after Mary was born. Mary had two children that died and one was called William, these experiences of death were mirrored in Mary's novel. Also reading journals from her husbands early life, he wanted to be a surgeon, and after talking with him and the family doctor where she thought up the idea of using electricity to bring corpses to life. In this essay I will be writing the about atmosphere of the chapter, the facial contrasts of the creature, Frankenstein's dream, the creatures intentions, the creatures special request, the prejudice against the creature and the destruction of Frankenstein. Frankenstein hysterical reaction towards his creation, I will show you is prejudice and unjust. ...read more.

The image of Clerval brought back memories of his father and Elizabeth. During the carriage ride the two friends talked about how his family were as Clerval visited them frequently. Frankenstein invited his close friend to stay over night at Frankenstein's place of residence, When the two friends settled Clerval began to realise the Frankenstein had been deprived of sleep, Frankenstein soon admitted that he had been occupied with one thing all too long without sleep, Frankenstein started trembling and showing symptoms of his illness, Clerval exclaimed in his concern about how ill Frankenstein was, that was when Frankenstein collapsed into a nervous breakdown. On the night of the monsters creation he found his creator on his bed, and as he started from his sleep the monster tried to utter some inaudible words, but Frankenstein did not stop to realise what the monster tried to say as he was startled by his freight and ran. The monster searched Frankenstein's bed chamber and found his journal, and took it with him, he found a cloak and ran to find Frankenstein, but to no avail. So the monster fled to a lodge owned by a family in the forest and the monster stayed with the animals in the hovel. He could see the family through a hole in the hovel, so Frankenstein sat down and read the book that he had stolen from Frankenstein's bedchamber. During the time that the monster stayed with the family unable to contact them because of his hideousness, The creature befriended the blind ...read more.

creature feels that he needs to be destroyed because his feeling of guilt had overridden him and now with his 'Father's' death had brought the creatures mission and life to an end, so the final chapter of the story, finishes with Frankenstein and his Creation floating of on a floating fiery iceberg. Mary Shelley tries to bring her morals through in this book; she shows that dangers of new technology could cause extreme danger if they are not used with the correct moral ethical controls. And the responsibility all parents have towards there children how they should be looked after or else the child will grow up the same way he was brought up in a non-caring way, and also that everyone in society has responsibility to the helpless and needy, because they too want to be helped and accepted by others or they too will feel unable to manage with the life that was brought on to them. It also shows that no matter what, there will be prejudice found in your lifetime and they will be prejudice towards you, but in this novel Frankenstein's creation was called The Monster, but he is only misunderstood the real monster in this novel is Victor Frankenstein himself, and all the torture he went through he brought upon himself. In conclusion, you have a responsibility towards everyone else, and your actions you hold may be brought against you if you cannot bring yourself to show the correct moral ethics. ?? ?? ?? ?? Dale Smith Frankenstein Coursework 02/05/07 ...read more.