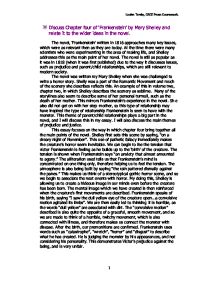 Discuss Chapter four of 'Frankenstein' by Mary Shelley and relate it to the wider ideas in the novel.

* Discuss Chapter four of 'Frankenstein' by Mary Shelley and relate it to the wider ideas in the novel. The novel, 'Frankenstein' written in 1816 approaches many key issues, which were as relevant then as they are today. At the time there were many scientists who were experimenting in the area of making life, and Shelley addresses this as the main point of her novel. The novel is still as popular as it was in 1818 (when it was first published) due to the way it discusses issues, such as prejudice and parent/child relationships, which are still relevant to modern society. The novel was written my Mary Shelley when she was challenged to write a horror story. Shelly was a part of the Romantic Movement and much of the scenery she describes reflects this. An example of this in volume two, chapter two, in which Shelley describes the scenery as sublime. Many of the storylines also seem to describe some of her personal turmoil, such as the death of her mother. This mirrors Frankenstein's experience in the novel. She also did not get on with her step-mother, so this type of relationship may have inspired the type of relationship Frankenstein is seen to have with the monster. This theme of parent/child relationships plays a big part in the novel, and I will discuss this in my essay. I will also discuss the main themes of prejudice and justice. This essay focuses on the way in which chapter four bring together all the main points of the novel. ...read more.

The idea of naming a human is to give it identity, so it can be recognised, however, Frankenstein's refusal to do show, tells us he does not care about him and thinks that by ignoring him, and not giving him an identity, he will go away. In this respect, he is neglecting his parental responsibilities. We then see him running away from it when it tries to reach out to him for security and as a symbol of love. He currently has no warm feelings towards the monster, who we can only presume has run away, when he was rejected by his father. Throughout the rest of the novel, we see Frankenstein continually denying his presence, and only thinks of him at times when horrible events have taken place. He presumes him to be the murderer of his brother William, purely based on his deceptions which he gained from his appearances. In order to confirm this, he seeks him out to ask his story. They then meet in the cold mountains in chapter 2 of the second volume. This is two years after his creation, in which the monster has learnt to talk and has also learnt many other skills any other human would have had. This is the only time Frankenstein shows any sentimentality towards his creation, and so he decides to listen to his story in order to discover what he has been doing. He says "I felt what the duties of a creator towards his creation were...i ought to render him happy." ...read more.

They obviously reflect Mary Shelley's opinions and the way she sees the world. The way the novel uses these issues made it popular in 1818, and still popular today. Prejudice is a main issue in modern day society, with racism, sexism and ageism still problems in certain countries throughout the world. People who suffer at the hand of discrimination, may enjoy the book, as they can relate to the monster. This may be the reason of its success. In the novel, you are led to sympathise with the monster, when he tells his story. His story is a contrast to Frankenstein's words, and we see a side to him that is not as miserable and horrible as Frankenstein thinks, and leads us to agree with. I feel great sympathy towards the monster, and ho he is made to feels that revenge is the only thing he can do. The actual genre of the novel, not only relates to the murders, but also to how the injustice and prejudice makes the creature feel. Mary Shelly used the novel to express her opinions. Her upbringing as a Romantic may have affected how Frankenstein believes the only beautiful things can be great. Romanticism is also linked to how nature inspired powerful feelings in people, and so this may also reflect on the way the characters feel in the novel. Although, she may have thought prejudice was wrong and so wrote about that in the novel. I think that Shelley wanted her novel to influence others, make others reject prejudice and bias and the neglect of a child. The novel does this well, and is still as influential today as Shelly had hoped. Louise Tarsky, GSCE Prose Coursework. 1 ...read more.