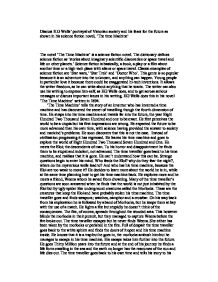 Discuss H.G Wells' portrayal of Victorian society and his fears for the future as shown in his science fiction novel, 'The time Machine'

Discuss H.G Wells' portrayal of Victorian society and his fears for the future as shown in his science fiction novel, 'The time Machine' The novel 'The Time Machine' is a science fiction novel. The dictionary defines science fiction as 'stories about imaginary scientific discoveries or space travel and life on other planets.' Science fiction is basically, a book, a play or a film about another time or a high-tech place with aliens or space travel. Classic examples of science fiction are 'Star wars,' 'Star Trek' and 'Doctor Who'. This genre is so popular because it is an adventure into the unknown, and anything can happen. Young people in particular love it because there could be exaggerated hi-tech inventions. It allows the writer freedom, as he can write about anything that he wants. The writer can also use his writing to express him-self, as HG Wells does, and to get across serious messages or discuss important issues in his writing. HG Wells does this in his novel 'The Time Machine' written in 1894. 'The Time Machine' tells the story of an inventor who has invented a time machine and has discovered the secret of travelling though the fourth dimension of time. He straps into his time machine and travels far into the future, the year Eight Hundred Two Thousand Seven Hundred and one to be exact. He first perceives the world to be a utopia but his first impressions are wrong. ...read more.

The rich could treat the poor as they liked, as there was no social justice. H.G Wells deplored this and knew that society had to change. The themes he addresses in his novel are discrimination, changes in society, the importance of socialism and the dangers of rebellion. Wells is using the Eloi and the Morlocks to represent Victorian society. Eloi, from the French word elite, represent the upper class. The morlocks are the working class. H.G wells was born in Bromley in Kent, into a lower middle class family. His father was a shopkeeper and his mother was a housekeeper for the rich, so he knew of the way the rich treated the poor. At the house where his mother was housekeeper he studied at the library. In 1883 he became a teacher/pupil at Midhurst Grammar School. He obtained a scholarship to the Normal School of Science in London and there he studied biology. He got his degree in 1890, and continued his career as a teacher. In 1893 Wells became a full time writer, his debut book was 'The time Machine' and he went on to write other science fiction classics. Wells was socialist and his books were based on his political views. He believed that everyone should have equal rights, that factories should be state owned and that the workers should have more rights. Wells dreamed of a utopian society where everyone is equal and happy. ...read more.

In chapter XI the Time Traveller explores natural entropy, when he travels to thirty Million years into the future, the world is slowly losing its energy (the earth stops moving, the sun dies, the winds cease and the only sign of life is a creature crawling in the water.) Rather than becoming more perfect we lose our energy. The Time Traveller leaves after only a few minutes, full of despair about the future and what has happened to the world because of mankind's stupidity, so the adventure ends on a highly pessimistic note. The ending is a warning of what could happen to us if we don't treat each other well, it may take millions of years, but unless change occurs the end result will be the inevitable. All the great things humans did and created would all be for nothing. So where life started; in the sea, it ends there. H.G Wells was a socialist and 'The Time Machine' is a warning of what might befall mankind if capitalism continued to exploit the working class for the benefits of the rich. Wells uses science fiction to put across his socialist message; this is particularly effective because the message is put into an exciting context. He uses enthralling stories about guns and space ships, the reader will enjoy the book and the message will come across. Wells wants us to realise three things from this book. The first one is that everyone is equal; the second is that we should treat everyone fairly and the third is that there are consequences if the first two are ignored. ...read more.