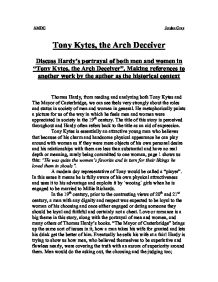 Discuss Hardys portrayal of both men and women in Tony Kytes, the Arch Deceiver. Making references to another work by the author as the historical context.

AMDG Jordan Gray Tony Kytes, the Arch Deceiver Discuss Hardy's portrayal of both men and women in "Tony Kytes, the Arch Deceiver". Making references to another work by the author as the historical context Thomas Hardy, from reading and analyzing both Tony Kytes and The Mayor of Casterbridge, we can see feels very strongly about the roles and status in society of men and women in general. He metaphorically paints a picture for us of the way in which he feels men and women were appreciated in society in the 19th century. The title of this story is perceived throughout and Hardy often refers back to the title as an aid of expression. Tony Kytes is essentially an attractive young man who believes that because of his charm and handsome physical appearance he can play around with women as if they were mere objects of his own personal desire and his relationships with them are less than substantial and have no real depth or meaning, rarely being committed to one woman, page 1 shows us this: "He was quite the women's favorite and in turn for their likings he loved them in shoals". A modern day representative of Tony would be called a "player". In this sense it means he is fully aware of his own physical attractiveness and uses it to his advantage and exploits it by `wooing` girls when he is engaged to be married to Millie Richards. ...read more.

In The Mayor of Casterbridge, Michael Henchard was a lousy drunk, an awful husband and an abuser of power. For this, he payed the price. His past caught up with him and once he was Mayor things went very bad as his wife came into town. As the story progresses, Tony has to ask Unity to secrete herself under the wagon tarpaulin as Milly came along. Once milly got into the wagon Tony made her hide under the sheets in the front as to hide herself from Hannah's glare. Then once Hannah got in things got out of control as he, knowing full well he was in earshot of both Unity and his fianc�e Milly, started telling Hannah of his sweet little nothings. I believe Hardy portrayed this scene as an illustrated metaphor of Tony's life; once a good looking girl comes into the scene he flirts and flatters them into believing he is really taken by her beauty but when a better or more attractive girl comes along he "hides" them so he can start his false sweet-talk all over again in an attempt to woo her and if he succeeds then he will forget about his previous sweetheart and shatter her feelings and emotions, not caring about how she feels as long as he's happy and with the "new girl on the block". Tony is a very good (or bad) ...read more.

Hannah refuses Tony for two main reasons; firstly because of what she recently discovered (about the two other girls he had been playing about with who were also in the wagon) and secondly because her father was there. Male status and standing in society were generally superior to that of women. So gaining the respect of men was a valued aspect of life, this is why she refused him in front of her dad. If she had any personal pride she would of rejected Tony and gained the respect of her father. Unity however, had no one to gain respect from or be 'judged' by - apart from herself. She rejected Tony outright and this shows that she has even greater pride and status then Hannah does. Tony's declaration to Milly was far from sincere and meant as much to Tony as a grain of sand does to a beach. He has taken Milly as a last resort as he has been rejected by Hannah and Unity so he doesn't want to be left with nothing. Although it wasn't written by Hardy, the story Tony Kytes bares resemblance to Shakespeare's "Much ado about nothing" in the way women were treated unequally to men and women shouldn't speak of place or act inexplicably, abnormally from what they were expected to or they would lose their (if they had one) good reputation or standing in society. However it was okay for men to act accordingly. In conclusion, men, once again, have been portrayed to be of superior status ...read more.