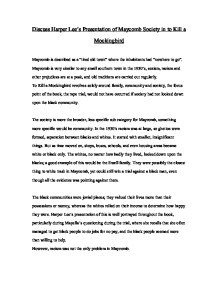 Discuss Harper Lee's Presentation of Maycomb Society in to Kill a Mockingbird Maycomb is described as a "tired old town" where the inhabitants had "nowhere to go". Maycomb is very similar to any small southern town in the 1930's, sexism, racism and other prejudices are at a peak, and old traditions are carried out regularly. To Kill a Mockingbird revolves solely around family, community and society, the focus point of the book, the rape trial, would not have occurred if society had not looked down upon the black community. The society is more the broader, less specific sub category for Maycomb, something more specific would be community. In the 1930's racism was at large, so ghettos were formed, separation between blacks and whites. It started with smaller, insignificant things. But as time moved on, shops, buses, schools, and even housing areas became white or black only. ...read more.

The women were supposed to remain at the home, looking after the younger children, and cooking for the older children when they returned from school. Occasionally, in the black community, where they were too poor to survive off one wage, the women would work in the houses, as maids or cooks, similar to Calpurnia. She is fortunate, as Atticus does not treat her as a servant; he treats her as an equal, knowing full well that he could not manage without her. Harper Lee again portrays this very well. Harper Lee presents Maycomb society as two split communities, attempting to join together, but failing. Every aspect of the book somehow comes down to the society of Maycomb. Also, class and family history is an important part of tradition to many of the people in Maycomb. When Aunt Alexandra comes to visit, she feels it her duty to put upon Scout the importance of her roots. ...read more.

Characters similar to Miss Rachel, the town gossip queen, appear to have nothing better to do than to live through the people that they talk about. The ladies in the Missionary Society would like others to consider that they care about others, but in reality, their meetings soon turn towards the most recent story going around town. Harper Lee uses everyday occurrences such as the gossiping to allow the reader to relate to Maycomb and its inhabitants with greater ease. When looked into deeper, excluding the racism, Maycomb is not dissimilar to any small town or village today. Every family is known and stereotyped, and those views are maintained through the generations, perhaps passed down in stories and suchlike. Harper Lee uses this similarity between Maycomb and her childhood residence, after all, she is perhaps writing about her childhood experiences and feelings through Scout. This is why Harper Lee's presentation of Maycomb society is so well portrayed, because the society is based on a real community and the residents embodied in fiction by Harper Lee. ...read more.