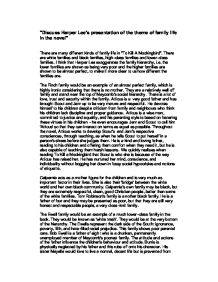 &quot;Discuss Harper Lee's presentation of the theme of family life in the novel&quot;.

"Discuss Harper Lee's presentation of the theme of family life in the novel" There are many different kinds of family life in "To Kill A Mockingbird". There are white families and black families, high-class families and lower-class families. I think that Harper Lee exaggerates the family hierarchy, i.e. the lower families are shown as being very poor and the higher families are shown to be almost perfect, to make it more clear to us how different the families are. The Finch family would be an example of an almost perfect family, which is highly ironic considering that there is no mother. They are a relatively well off family and stand near the top of Maycomb's social hierarchy. There is a lot of love, trust and security within the family. Atticus is a very good father and has brought Scout and Jem up to be very mature and respectful. ...read more.

Calpernia acts as a mother figure for the children and is very much as important factor in their lives. She is also their 'bridge' between the white world and her own black community. Calpernia's own family may be black, but they are extremely respectful, clean, good Christian people, better than some of the white families. Tom Robinson's family is another black family. He is a father of four and they may be presented as poor, but that they are still very honest and respectable people, a very close-knit family. The Ewell family would be an example of a much lower-class family in the book. They would be known as 'white trash'. They would be at the very bottom of the hierarchy. The Ewells represent the dark side of the South: ignorance, poverty, filth, and hate-filled racial prejudice. This family shows poor parental care. Bob Ewell is a father of eight who is a drunken, permanently unemployed member of Maycomb's poorest family. ...read more.

When Boo was in his teenage years and was caught for joy riding, his father took him home and kept him in the house continually. When his father died, Arthur became the ward of his brother, Nathan Radley. Though less severe than his father, he still kept Arthur more or less imprisoned in the family home. We don't hear very much about Dill's family, but from what we do hear, we can see that he has a very difficult family situation. He comes from a broken family. Dill spins grand tales about his father but runs away from home late in the book because he feels his mother and step-father don't care about him. Harper Lee makes it very clear to us that parents influence children so much. We see this in the Finch family and the Ewell family. She also shows us different aspects of family life and how different classes cope. ...read more.