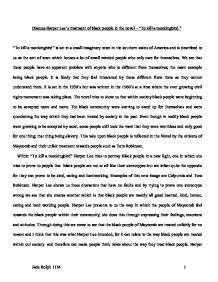 Discuss Harper Lee's treatment of black people in the novel -

Discuss Harper Lee's treatment of black people in the novel - "To kill a mockingbird." "To kill a mockingbird" is set in a small imaginary town in the southern states of America and is described to us as the sort of town which houses a lot of small minded people who only care for themselves. We see that these people have an apparent problem with anyone who is different from themselves; the main example being black people. It is likely that they feel threatened by those different from them as they cannot understand them. It is set in the 1930's but was written in the 1960's at a time where the ever growing civil rights movement was taking place. The novel tries to show us that within society black people were beginning to be accepted more and more. The black community were starting to stand up for themselves and were questioning the way which they had been treated by society in the past. Even though in reality black people were growing to be accepted by most, some people still took the view that they were worthless and only good for one thing; that thing being slavery. This take upon black people is reflected in the Novel by the citizens of Maycomb and their unfair treatment towards people such as Tom Robinson. ...read more.

Once again she screams at the children as they pass her house but this time she tells them that their father is "No better then the Negros he works for!" This remark emphasises the fact that black people were the lowest among society, even lower then what was known as the "white trash" and therefore they should not be regarded as equals or treated with the same respect that they would treat fellow members of their community. I think the fact that Atticus is willing to treat every one the same and is not scared of the black people within society threatens Mrs Dubose along with other members of Maycomb as they cannot understand why people would take this approach towards people who are different from themselves. Mrs Dubose is used as a device to put an emphasis on the fact that racism was so common; we can interpret this because of the way in which we see that Atticus was not surprised nor angry when he heard abut the way Mrs Dubose had acted towards his children even though they had nothing to do with the matter at hand. In responding to Mrs Dubose's outburst Atticus warns the children that as the trail progresses more and more people will take this view on him and the abuse will become worse but they must ignore it and keep out of trouble. ...read more.

Tom Robinson's trial proved this to us as it was obvious that he was innocent but the people of Maycomb would much rather believe a white girl, whom they can relate to in terms of colour rather then a black man whom they cannot understand and are most likely scared of due to the fact that he is different. Throughout the course if the trial we come to see that Tom is innocent and Mayella is just lying in order to protect her father but none of that matters to the people of Maycomb for all that matters is that the accused was black. Being black meant Tom was doomed from the start, his trial was pointless as the truth didn't seem to matter at all, the only fact that the jury and the other members of the community were interested in was that Tom was a black man. This trial showed just how bad prejudice can be, a man was imprisoned for a crime he didn't commit all because he was black. His family had to deal with never being able to see him again knowing that the same thing could happen to them one day because they too were black members of the community. 1 Jade Rolph 11M ...read more.