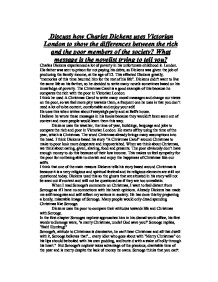 Discuss how Charles Dickens uses Victorian London to show the differences between the rich and the poor members of the society? What message is the novelist trying to tell you?

Discuss how Charles Dickens uses Victorian London to show the differences between the rich and the poor members of the society? What message is the novelist trying to tell you? Charles Dickens experienced a lot of poverty in his unfortunate childhood in London. His father was sent to prison for not paying his debts, so Dickens was given the job of producing the family income, at the age of 12. This effected Dickens greatly, "memories of this time haunted him for the rest of his life". Dickens didn't want to live the same life as his farther, so he decided to write many novels sometimes based on his knowledge of poverty. The Christmas Carol is a good example of this because he compares the rich with the poor in Victorian London. I think he used A Christmas Carol to write many moral messages and change our views on the poor, so we feel more pity towards them, a frequent one he uses is that you don't need a lot of to be content, comfortable and enjoy your self. He uses this when writes about Fezzywig's party and at Bell's house. I believe he wrote these messages in his books because they wouldn't been seen out of context and more people would learn them this way. Dickens uses the weather, the time of year, buildings, language and jobs to compare the rich and poor in Victorian London. ...read more.

Dickens again wants us to feel sympathy for the poor. As soon as the story starts, Dickens describes the atmosphere in London using weather imagery. Dickens describes the poor suffering and making disappointing efforts to keep them selves warm. "It was cold, bleak biting weather: foggy withal: and he could hear the people in the court outside, go wheezing up and down, beating their hands upon their breasts, and stamping their feet upon the pavement stones to warm them." From this description I can tell that the poor are open to the elements of the cold, therefore they are dressed in tattered clothes that leave their bodies venerable to disease and illness. I think Dickens describes the poor in conditions like these, because I believe he wants the rich people, reading the book to become aware of their fortunate social status in life, and think them selves lucky that working conditions, such as the ones in the story of A Christmas Carol, are not in attendance in their lives. On page 13 of A Christmas Carol, Dickens uses a lot of personification in his description of the weather. He describes the cold as intense and "foggier yet, and colder. Piercing, searching, biting cold." By using personification Dickens achieves many images through small sentences. Through these few words and phrases, I can picture the poor in pain and suffering as the needle like cold prods and prick them like voodoo dolls. ...read more.

Bob Crachit jobs is a good example of Dickens making the jobs the poor have seem worst then they actually are. Bob Crachit works inside an office unlike some poor people who have to bear with the cold outside. Even though Bob is inside Dickens still describes him in poor conditions, such as only possessing "one coal" by just describing the elements of the cold affecting Bob, makes his job seem a lot worse than it actually is. In conclusion I believe one of Dickens mane objectives of this story was the make the rich self reflect and self recognise their actions in society to day. I think Dickens was successful in doing this because he is constantly forcing the reader towards formulating a moral judgement by projecting a lonely mean image of Scrooge and therefore awakening a social conscience. The reader knows Scrooge is unhappy because of the way Dickens describes the way Scrooge treats people. His use of language, many adjective words, and the situations in which he situates the poor in using jobs, buildings, weather and the time of year helps force the reader towards formulating a moral judgement. I enjoyed reading the book very much because of his descriptive language, which helps your mind to think of detailed images that Dickens is trying to describe. I think Dickens was very successful in changing rich peoples views for the better, even though his story is fiction, many facts are written about the poor, which helps us get more of a social conscience and understanding of the life they live. ...read more.