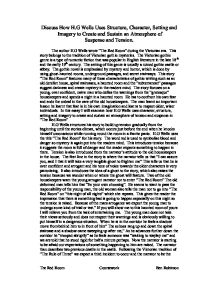 Discuss How H.G Wells Uses Structure, Character, Setting and Imagery to Create and Sustain an Atmosphere of Suspense and Tension.

Discuss How H.G Wells Uses Structure, Character, Setting and Imagery to Create and Sustain an Atmosphere of Suspense and Tension. The author H.G Wells wrote "The Red Room" during the Victorian era. This story belongs to the tradition of Victorian gothic mysteries. The Victorian gothic genre is a type of romantic fiction that was popular in English literature in the late 18th and the early 19th century. The setting of this genre is usually a ruined gothic castle or abbey. The gothic novel is emphasised by mystery and horror, which is done by using ghost-haunted rooms, underground passages, and secret stairways. This story "The Red Room" features many of these characteristics of gothic writing such as an old derelict house, spiral staircases, a haunted room and the "subterranean" passages suggest darkness and create mystery in the readers mind. The story focuses on a young, over confident, naive man who defies the warnings from the "grotesque" housekeepers and spends a night in a haunted room. He has to confront his own fear and ends the ordeal in the care of the old housekeepers. ...read more.

It also introduces the idea of a ghost to the story, which also raises the tension because we wonder when or where the ghost will feature. Two of the old housekeepers warn the young arrogant narrator not to enter "The Red Room" The old deformed man tells him that "Its your own choosing". He seems to want to pass the responsibility of the young man, the old woman also tells the man not to go into "The Red Room" on "this night of all nights" which she repeats. This gives the reader the impression that there is something bad is going to happen especially on this night so the tension is raised. Because of the mans arrogance we expect the young man to undergo some kind of trial or test." If you will show me to this haunted room of yours I will relieve you from the task of entertaining me. The young man does not take their views seriously and does not respect their warnings and is obviously willing to put himself in a dangerous situation. ...read more.

The author has done this to lull the reader into a false sense of security. The reader is given the impression that every thing is going to be fine, just before dramatically increasing the tension as all the candles go out. From this point the narrator becomes more and more afraid "frantic with horror " and he admits "my self-possession deserted me" He stumbles around the room in a state of panic and the climax of the story comes when he knocks himself out of a piece of furniture. When he wakes up, it is light and all the tension has dissipated. Wells uses "long, draughty subterranean" passages and spiral staircases to keep with the stories genre. He also uses these to build up tension and mystery "walked down the chilly, echoing passage" This description helps build the image to the reader. I personally enjoyed the story it gripped me because of the first person perspective so I could feel the same as the narrator. Wells wrote it in this way so the reader would feel the tension building up. The Red Room Coursework Ben Robinson ...read more.