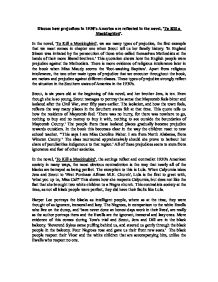 Discuss how prejudices in 1930's America are reflected in the novel, 'To Kill a Mockingbird'.

Discuss how prejudices in 1930's America are reflected in the novel, 'To Kill a Mockingbird'. In the novel, 'To Kill a Mockingbird', we see many types of prejudice, the first example that we meet comes in chapter one when Scout tell us her family history. 'In England Simon was irritated by the persecution of those who called themselves Methodists at the hands of their more liberal brethren.' This quotation shows how the English people were prejudice against the Methodists. There is more evidence of religious intolerance later in the book when Miss Maudy scorns the 'foot-washing Baptists'. Apart from religious intolerance, the two other main types of prejudice that we encouter throughout the book, are racism and prejudice against different classes. These types of prejudice strongly reflect the situation in the Southern states of America in the 1930's. Scout, is six years old at the beginning of this novel, and her brother Jem, is ten. Even though she is so young, Scout manages to portray the sense that Maycomb feels bitter and isolated after the Civil War, over fifty years earlier. The isolation, and how the town feels, reflects the way many places in the Southern states felt at that time. ...read more.

He lives with the Negroes and he has several half-cast children, and he has been rejected by whites who want nothing to do with a man who loves a black woman. His reaction to this is to find a way for society to excuse him, he drinks Coca Cola out of a paper bag and lets everyone else think that it is whisky so that they can pass him off as drunk. In chapter twenty he is trying to explain this to Scout, Jem and Dill; '"I try to give 'em a reason, you see. It helps if they can latch onto a reason. When I come to town, which is seldom, if I weave a little and drink out of this sack, folks can say Dolphus Raymond's in the clutches of whisky- that why he won't change his ways. He can't help himself, that's why he lives the way he does."' 'The Radley Place was inhibited by an unknown entity, the mere description of whom it was enough to make us behave for days on end.' Scout, Jem and Dill all fear Boo Radley at the beginning of the novel, though at the end his true character is discovered. ...read more.

Steve Biko was the leader of the black people in South Africa who died whilst in the hands of the government. This shows that through history there were other people like the fictional character of Atticus Finch who supported blacks. In this novel and in life in the 1930's Southern States of America, racism and prejudice faced people all of the time, but some tried to change this, in 'To Kill a Mockingbird', the character that does this is Atticus. He is trys to bring equality to the town of Maycomb. Miss Maudy is right when she says that Atticus has made a '"tiny step"', he proved Tom Robinson innocent enough to keep the jury out for a long time. But there is one quote that sums up societyat the time, and it comes from Jem. '"You know something, Scout? I've got it all figured out, now. I've thought about it a lot lately and I've got it figured out. There's four kinds of folk in the world. There's the ordinary people like us and the neighbours, there's the kind like the Cunningham's out in the woods, there's the kind like the Ewell's don at the dump and the Negoes."' ...read more.