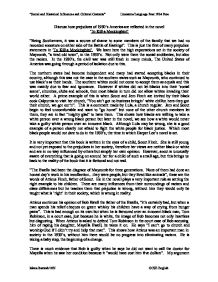 Discuss how prejudices of 1930's America are reflected in the novel 'To Kill a Mockingbird'.

Discuss how prejudices of 1930's America are reflected in the novel 'To Kill a Mockingbird' "Being Southerners, it was a source of shame to some members of the family that we had no recorded ancestors on either side of the Battle of Hastings". This is just the first of many prejudice statements in 'To Kill a Mockingbird'. We learn here the high expectations set in the society of Maycomb, "a tired old town", in the 1930's. Not only were there the social snobberies, but also the racism. In the 1930's, the civil war was still fresh in many minds, The United States of America was going through a period of isolation due to this. The northern states had become independent and many had started accepting blacks in their country, although this was not the case in the southern states such as Maycomb, who continued to use black's as their hands. The southern whites could not come to accept them as equals and this was mainly due to fear and ignorance. However if whites did not let blacks into their 'social scene', churches, clubs and schools, then most blacks in turn did not allow whites invading their world either. A prime example of this is when Scout and Jem Finch are invited by their black cook Calpurnia to visit her church, "You ain't got no business bringin' white chillun here-they got their church, we got our'n". ...read more.

My argument is that if he was more worried about money then his daughters health then surely he would not of gone to so much trouble convicting someone because Mayella was rapped. It was clearly a set up to take a black man to jail knowing that "when it's a white man's word against a black man's, the white man always wins". Although we know that anyone whether they are black or white can still be a bad person, Harper Lee tries to make the black people's world so calm and loving and portraying them as having "biblical patience". Then as a major contrast, we are introduced to white characters that resort to drink and have bad tempers such as Bob Ewell. This contrast is important although it is an exaggeration it is the only way we see how disgusting and pointless racism was in the 1930's, and still is now. Towards the end of the book we see Aunt Alexandra start to see straight through her fellow neighbours, "I mean this town. They're perfectly willing to let him do what they are too afraid to do themselves". She addresses that there are white people willing to accept the black people but they are just too afraid to bring their opinions forward as they think they will be criticised by others. ...read more.

But if you are taught it goes from A to C you are being told otherwise without realising it is wrong, therefore will be teaching others what is not right. We know Atticus managed to get his view across to at least a few people such as his children, Miss Maudie and even Aunt Alexandra the same woman who said saying nigger was correct, seemed to see sense. It is also up to us not to give up just as Atticus did not. We saw he did his best in court and so did the black people when they showered him with gifts of appreciation. They also showed him much respect, "the Negroes were getting to their feet" as Atticus walked down the court room aisle despite loosing the case. The whole book revolves around Scout, if it was not told by her it would be from a totally different angle and give a different view. Harper Lee tells it very clearly, as if the whole story is a test for scout to find out where she stands or where she wants to stand in her society. We find out what a strong character she is during the end of the novel after having encountered much racism surrounding her and still not being sucked in. "Social and Historical Influences and Cultural Contexts" Literature/Language Post 1924 Pros Mona Bamrah/10N GCSE English ...read more.