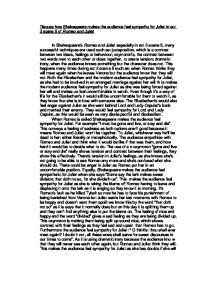 Discuss how Shakespeare makes the audience feel sympathy for Juliet in act 3 scene 5 of Romeo and Juliet In Shakespeare's Romeo and Juliet especially in act 3 scene 5, many successful techniques are used such as: juxtaposition, which is a contrast between two ideas, feelings or behaviour; oxymoron's, the contrast between two words next to each other or close together, to create tension; dramatic irony, when the audience knows something but the character does not. This happens many times during act 3 scene 5 such as: when Romeo thinks they will meet again when he leaves Verona but the audience know that they will not. Both the Elizabethan and the modern audience feel sympathy for Juliet, as she had to be involved in an arranged marriage against her will this makes the modern audience feel sympathy for Juliet as she was being forced against her will and makes us feel uncomfortable to watch. Even though it's a way of life for the Elizabethan's it would still be uncomfortable for them to watch it, as they know that she is in love with someone else. The Elizabethan's would also feel anger against Juliet as she went behind Lord and Lady Capulet's back and married their enemy. They would feel sympathy for Lord and Lady Capulet, as this would be seen as very disrespectful and disobedient. ...read more.

This makes us feel sympathy for Juliet as the audience know why her mother is up so early wanting to talk to her, this creates dramatic irony, and the audience are worried for Juliet. Another way that Lady Capulet's is making Juliet feel forced into marriage is when she says " He shall not, make me there a joyful bride". The words "shall not" Imply that she defiantly wont marry Paris. This is the first time that Juliet challenges her parents because she is already married to someone she actually loves. The modern audience would sympathise with Juliet being forced into marriage whereas the Elizabethan audience would feel sympathy for Lord and Lady Capulet as Juliet disobeyed her parents and went behind their backs. If Juliet had said no to marrying Paris her dad would have disowned her, she would have no job or training to earn money. In Elizabethan times there was no support system for the homeless so she would have nobody to help her and nothing to support her. Juliet is motivated to disobey her parents by her love for Romeo. Before Juliet fell in love at the party she told Lady Capulet she would look at Paris and see if she could love him but now she's totally refusing to marry him " I will not marry yet". ...read more.

The word "first" suggests that the nurse assumes she will have another husband. The nurse further upsets Juliet when she says, " Romeo is a dishclout" This upsets Juliet as she is putting her husband down and saying he isn't as good as Paris, the word "dishclout" implies Romeo is dirty and compared to Paris he is just everyday use whereas Paris is thought to be special and more worthy. For example " My husband is on earth, my faith is in heaven". Here Juliet is suggesting Romeo is still alive and her faith id in god- he knows she is married so she would be going against her faith to marry Paris. Using these techniques Shakespeare makes the audience fee; sympathy for Juliet. To conclude, Shakespeare successfully makes the audience feel sympathy for Juliet during act 3, scene 5 by making the other characters' behavior juxtapose with Juliet's feelings. Lord Capulet's behavior towards Juliet is very harsh considering she is his daughter. A modern audience would find it uncomfortable to watch, as we wouldn't be treated like that by our father's. Whereas an Elizabethan audience wouldn't be as sympathetic with Juliet but more with Lord and Lady Capulet as Juliet disobeyed them. Shakespeare also uses dramatic irony to make the audience sympathize with Juliet. Overall Shakespeare successfully used several techniques to make the audience feel sympathy for young Juliet. Abbie-Leigh Ogden ...read more.