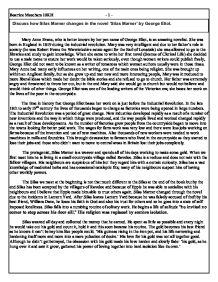 Mary Anne Evans, who is better known by her pen name of George Eliot, is an amazing novelist. She was born in England in 1819 during the industrial revolution. Mary was very intelligent and due to her father's role in society (he was Robert Evans the Warwickshire estate agent for the Earl of Lonsdale) she was allowed to go to the libraries and study to gain knowledge. When she came to write her first novel (Scenes of Clerical Life) she decided to use a male name to ensure her work would be taken seriously, even though women writers could publish freely, George Eliot did not want to be known as a writer of romances which women authors usually were in those times. Mary Anne had many early influences on her writing, one of the main ones being religion. She was brought up within an Anglican family, but as she grew up and met new and more interesting people, Mary was introduced to more liberal ideas which made her doubt the bible stories and she refused to go to church. Her father was extremely angry and threatened to throw her out, but in the end Mary said she would go to church but would not believe and would think of other things. George Eliot was one of the leading writers of the Victorian era; she bases her work on the lives of the poor in the countryside. The time in history that George Eliot bases her work on is just before the Industrial Revolution. ...read more.

Her strong feelings against God reflect in Silas's character in Raveloe. The connection between faith and community is shown by the villagers of Raveloe who must contribute to the church and other communal duties. So when villagers see how Silas rejects faith and does not show any interest in coming to church then they find it rather odd, especially in those times when religion paid a strong part in people's livelihood. When he finds Eppie his opinion on religious faith changes from how he felt in Lantern Yard, he doesn't mention God in the same way as he did do in Lantern Yard, but he bases his faith on the strength of his and Eppie's love for each other, 'since ... I've come to love her ... I've had light enough to trusten by; and now she says she'll never leave me, I think I shall trusten till I die.' Silas moves on from Lantern Yard to Raveloe and lives his life in solitude. Raveloe is a small village in the English countryside and Silas moves into a small cottage and uses it to work in. I believe that he seems to hide away and accept the situation. He has no plan to take revenge because he was heart-broken when he was run out of the place he had lived for so long and had probably loved. This feeling made him seem to others like he was resentful and bitter; but they misunderstood as he did not express his feelings. ...read more.

He describes to Eppie how he was and how he didn't mix with others, this made him remember memories, and how silly he was then. 'As the child's mind was growing into knowledge, his mind was growing into memory; as her life unfolded, his soul, long stupefied in a cold narrow person, was unfolding too, and trembling gradually into full consciousness.' He found love again and visited Lantern Yard but when he found it destroyed and totally changed, he realised that the questions he wanted answered would never be answered but he realises how content he is with his new founded faith and love. Silas becomes much more mature as he finds his restored faith in God, his love begins to grow and he seems much less na�ve. He feels happy and contented with the new life he had fallen into, by complete chance. Silas does not change personality but after building a wall from being hurt, he needed something to slowly break down the barrier to allow others from Raveloe to see his true characteristics and because of this barrier he becomes wiser and more confident, with whom he is and he forgets things that took place in the past. Eliot shows us how Silas is a three dimensional character as complicated and complex as a normal human being. The character Silas develops during the novel into a more welcoming person, until the end when he finally shows all trust and friendship. ?? ?? ?? ?? - 1 - Beatrice Meecham 10KH ...read more.