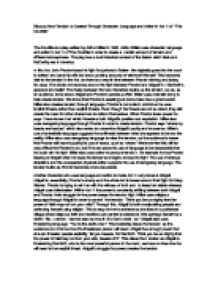 Discuss How Tension Is Created Through Character, Language and Action in Act III of The Crucible

Discuss How Tension Is Created Through Character, Language and Action in Act III of "The Crucible" The Crucible is a play written by Arthur Miller in 1953. Arthur Miller uses character, language and action in Act III of The Crucible in order to create a certain amount of tension and different atmospheres. The play has a dual historical context of the Salem witch trials and McCarthy era in America. In this Act, John Proctor loses his fight for justices in Salem. He originally goes into the court to defend and save his wife but ends up being accused of witchcraft himself. This becomes vital to the tension in the Act, as there is a very tin line between Proctor winning and losing his case. The whole Act revolves around the fight between Proctor and Abigail for Danforth's approval and belief. The rivalry between the two characters builds up the tension, as we, as an audience, know about Abigail and Proctor's previous affair. Miller uses dramatic irony to help create tension. We know that Proctor is seeking justice but also has a great secret. Miller also creates tension through language. Proctor is not quite in control so he uses implicit threats rather than explicit threats. ...read more.

'No, I cannot, I cannot stop my mouth; it's God's work I do.' Abigail also uses threatening language. 'You're the devils man!' This inevitably raises the tension, as the audience do not know how the threatened person will react. Abigail has enough power that she can threaten people explicitly, 'let you beware, Mr Danforth. Think you be so mighty that the power of Hell may not turn your wits, beware of it.' This raises the tension as Abigail is threatening Danforth, who is the most powerful person in the room; we have no idea how he will react to her explicit threat. Abigail's struggle for power creates the tension. Pleasing language is also used in order to increase the tension, Abigail pleads with 'Mary's Spirit' and the yellow bird, begging it to stop attacking her. This creates a climax of tension in which the frustration of both the audience and Proctor increases. Furthermore, action is used to increase the tension; Abigail's action is sudden and unexpected 'to the ceiling as if trying to talk it out of attacking her.' As she is so convincing, the audience is drawn into her deception, which also increases the tension. 'Pointing with fear, now rising up her frightened eyes.' ...read more.

Therefore, Miller increases the tension by making the audience wait for a reply, using pauses as a dramatic device. Danforth is the most powerful person in the Act and is biased towards Abigail, believing her instantly over Proctor. This allows Miller to create tension by having him in a position of authority. This means that Miller can use him to silence particular characters or to force them to speak. Miller uses Danforth to direct our attention and focal points. Danforth uses religious language, which builds up tension 'you are, in all respects, a gospel Christian.' By using religious language, Danforth asserts his power and supports his views. By asking questions about the other characters actions, the tension is also raises. Miller uses Danforth as a balance in the scene. Danforth also uses threatening language 'you will remain where you are.' This shows that he is still in power and will not be controlled by Abigail, even though we, as an audience, know that this is not true. It is not necessary for Danforth to have a lot of dialogue. His presence suggests power. Overall, the main tension throughout the Act is created through Language and Character. Action is used as an anticlimax from that great build-up of tension. The constant shifting of power between Proctor and Abigail causes the tension in the audience to build-up as they wish to know the final outcome. ...read more.