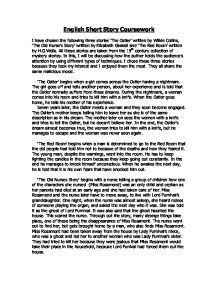 Discuss how the author holds the audiences attention 'The Ostler' written by Wilkie Collins, 'The Old Nurse's Story' written by Elizabeth Gaskell and 'The Red Room' written by H.G.Wells.

English Short Story Coursework I have chosen the following three stories 'The Ostler' written by Wilkie Collins, 'The Old Nurse's Story' written by Elizabeth Gaskell and 'The Red Room' written by H.G.Wells. All these stories are taken from the 19th century collection of mystery stories. In this, I will be discussing how the author holds the audience's attention by using different types of techniques. I chose these three stories because they took my interest and I enjoyed them the most. They all share the same malicious mood. 'The Ostler' begins when a girl comes across the Ostler having a nightmare. The girl goes off and tells another person, about her experience and is told that the Ostler normally suffers from these dreams. During the nightmare, a woman comes into his room and tries to kill him with a knife. When the Ostler goes home, he tells his mother of his experience. Seven years later, the Ostler meets a woman and they soon become engaged. The Ostler's mother keeps telling him to leave her as she is of the same description as in his dream. The mother later on sees the women with a knife and tries to tell the Ostler, but he doesn't believe her. In the end, the Ostler's dream almost becomes true, the women tries to kill him with a knife, but he manages to escape and the woman was never seen again. ...read more.

'His eyes opened towards the left hand side of the bed, and there stood - The women of the dream, again? - No! His wife; the living reality, with the dream spectre's face - in the dream spectre's attitude; the fair arm up - the knife clasped in the delicate, white hand.' This is a good example of how the tension build's up. This quote shows when the women tries to kill the Ostler. Wilkie Collins keeps the readers attention with the tension change and making the atmosphere feel uneasy. 'The Red Room' starts off with the quote 'It will take a very tangible ghost to frighten me'. There is a lot of irony in this because at the end of the play, he manages to scare himself, rather than it being the ghosts. The author uses words like 'dark and gloomy' to describe the surrounding, setting's and mysterious characters. The name of the story makes you think of danger referring to the colour red. H G Wells keeps the readers attention by starting it off with uneasy settings. The tension is constantly high during this story because of the wording of the room, but during the end of the story, the tension begins to build even more when the young man enters the room, and has to keep re-lighting the candles. ...read more.

This quote shows that he was a very brave man. The author describes the elderly characters as being very wise. 'The old women sat staring hard into the fire'. This shows the old lady was sitting deep in thought and she sounds very knowledgeable. In 'The Old Nurses Story' the nurse is very cautious protective and caring of Miss Rosamond. 'I held her tight with all my strength; with a set will I held her'. She obviously feels she must look after Miss Rosamont. Miss Rosamont on the other hand, is very curious especially of the little girl ghost, yet at the same time scared. The Spectre of Lord Furnival is a powerful character, which at some point obviously dominated the household. He is described as a fierce, dour, old man. All three stories refer to 'spectres' or ghosts, bringing in a very mysterious mood to the stories. But, all the plays have big differences in the way the tension is held and built up by the authors. All three stories keep the reader's attention, mostly by the use of language, but all the techniques of language are very different. I enjoyed 'The Ostler' the most because it was an easy story to understand. I also enjoyed the language the author used to describe the settings. I liked the way the tension was used to keep me reading the story, and how the end result of the nightmare became true, with the woman trying to kill the husband finishing it off. ...read more.