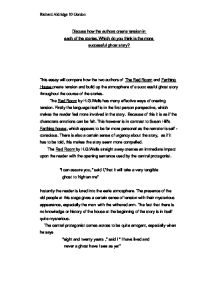 Discuss how the authors create tension in each of the stories. Which do you think is the more successful ghost story?

Discuss how the authors create tension in each of the stories. Which do you think is the more successful ghost story? This essay will compare how the two authors of The Red Room and Farthing House create tension and build up the atmosphere of a successful ghost story throughout the course of the stories. The Red Room by H.G.Wells has many effective ways of creating tension. Firstly the language itself is in the first person perspective, which makes the reader feel more involved in the story. Because of this it is as if the characters emotions can be felt. This however is in contrast to Susan Hill's Farthing house, which appears to be far more personal as the narrator is self-conscious. There is also a certain sense of urgency about the story, as if it has to be told, this makes the story seem more compelled. ...read more.

The tension is built now by the mention of the ghost along with the disturbing presence of the old people with are in complete contrast to the young man, acting as if they know something he doesn't. Well's also describes the mirror that is in the room, this also helps adds to the creepy atmosphere as it distorts objects or people. The story then continues to the mentioning of the red room itself a supposed haunted room located in the mansion. The tension builds rather rapidly here as the young man makes his way cautiously to the red room. "It's shadow fell with marvellous distinctness upon the white panelling and gave me the impression of someone waiting to waylay me" This is one of the vivid descriptions of the young man before he enters the red room. As soon as the young man enters the red room the atmosphere changes completely with the young man himself becoming quite nervous. ...read more.

Susan Hills Farthing House also has many ways of building tension. It starts off completely different to The Red Room with a slightly personal and urgent feel to it. The third paragraph starts "I daresay that it has made me vulnerable too, that this has brought the events" Here the impression is made that the central protagonist is reliving some deep disturbing past or memory. This alone creates some tension due to this reason. Later on in the story there is a slightly ominous feel to what may happen. Susan Hill creates tension then by describing the surroundings such as the gravestones along with the remote surroundings all of which increase the eerie atmosphere. When the narrator goes on to describe her aunt we get an impression that she is slightly isolated, this makes her a quite mysterious character. The old house that the narrator stays at has a certain sense of melancholy about it ?? ?? ?? ?? Richard Aldridge 10 Gordon ...read more.