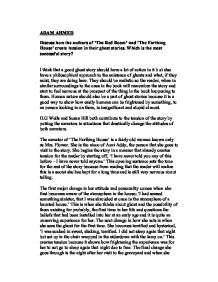 Discuss how the authors of &amp;#145;The Red Room&amp;#146; and &amp;#145;The Farthing House&amp;#146; create tension in their ghost stories. Which is the most successful story?

ADAM AHMED Discuss how the authors of `The Red Room' and `The Farthing House' create tension in their ghost stories. Which is the most successful story? I think that a good ghost story should have a lot of action in it but also have a philosophical approach to the existence of ghosts and what, if they exist, they are doing here. They should be realistic so the reader, when in similar surroundings to the ones in the book will remember the story and start to feel nervous at the prospect of the thing in the book happening to them. Human nature should also be a part of ghost stories because it is a good way to show how easily humans can be frightened by something, to an person looking in on them, is insignificant and stupid almost. H.G Wells and Susan Hill both contribute to the tension of the story by putting the narrators in situations that drastically change the attitudes of both narrators. The narrator of `The Farthing House' is a fairly old woman known only as Mrs. Flower. She is the niece of Aunt Addy, the person that she goes to visit in the story. She begins the story in a manner that already creates tension for the reader by starting off, `I have never told you any of this before - I have never told anyone.' This opening sentence sets the tone for the rest of the story because from reading that the reader will realize this is a secret she has kept for a long time and is still very nervous about telling. The first major change in her attitude and personality comes when she first becomes aware of the atmosphere in the house; `I had sensed something sinister, that I was shrouded at once in the atmosphere of a haunted house.' This is when she thinks about ghost and the possibility of them existing for probably, the first time in her life and questions the beliefs that had been installed into her at an early age and it is quite an unnerving experience for her. ...read more.

There is little description of the outside of the castle, all we get to know about it is that moonlight can get through the windows and is the main source of light at night. The Red Room itself is a large room containing some furniture, a bed, a chimney and two mirrors. The room is also dark and his candle `was a little tongue of light in its vastness that failed to pierce the opposite end of the room.' This all creates tension by the reader knowing something will happen to the man because of his cockiness and the isolated surroundings inside the castle just increase that tension, especially seems how the caretakers had refused to take him there because they were too scared. I think that `The Farthing House' author made the better setting for a ghost story as the feeling of isolation is stronger and next to a graveyard of dead children gives you a haunted feeling about the place and you also wonder if there are any hidden secrets that may have been forgotten over the years it has been there. The structure of the story is very important in relation to the tension in the stories because the authors made deliberate decisions about how long to make sentences, where the climax should be and how to craft the ending in a way that will wrap up any loose ends that might be there after the climax. The sentence length in `The Red Room' is important because a lot of short sentences would not create the same kind of tension as the longer, complex and sophisticated sentences that H.G Wells uses most of the time, for example, `I put down my empty glass on the table and I looked across the room, and caught a glimpse of myself, abbreviated and broadened to an impossible sturdiness, in the queer old mirror at the end of the room.' ...read more.

When `The Farthing House' was written, nearly one hundred years after `The Red Room' the age of witches and ghosts have long gone and the age of sceptics that demand hard proof before believing anything are here. But although the age of religion is over it has been replaced by spirituality, not one particular faith but living life like you think you should and this is becoming more and more popular. That is one of the reasons Mrs Flower didn't reveal her secret to anybody, for fear of rejection from the society she was in. She still hadn't talked to anybody against it as she had only wrote a letter which proves she is still unsure of whether she should tell anybody about her experience. I don't think the author was on any side in specific but I think she leaned a bit more to spirituality rather than science or religion because although she didn't mention faith or it can't be true otherwise someone would have documented it already she did believe in ghosts after her experience without seeming religious. I believe that the best story overall was `The Red Room.' I think this because it is quite a bit more exciting, dangerous, edge of your seat stuff. I preferred the narrator because of his attitude, I'm right, your wrong rather than an old woman who has grown up not thinking for herself and just being spoon fed everything she believes. The structure in `The Red Room' is also better as it has just the right sentence lengths for not too long and not too short, also the climax I think is in the right place. About a page from the end with a page long ending which discussed the aspects of the story that they had theories on. So all in all although `The Farthing House' was a good story `The Red Room' had an edge over it that meant I found it more enjoyable to read. ...read more.