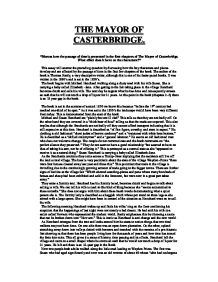 &quot;Discuss how the passage of time is presented in the first chapters of The Mayor of Casterbridge. What effect does it have on the characters?&quot;

THE MAYOR OF CASTERBRIDGE. "Discuss how the passage of time is presented in the first chapters of The Mayor of Casterbridge. What effect does it have on the characters?" This essay will answer the preceding question by discussing how the key characters and places develop and are affected by the passage of time in the first few chapters of the book. The author of the book is Thomas Hardy, a very descriptive writer, although this is one of his faster paced books. It was written in the 1880's and is set in the 1830's. The book begins with Michael Henchard walking along a dusty road with his wife Susan. She is carrying a baby called Elizabeth -Jane. After getting to the fair taking place in the village Henchard becomes drunk and sells his wife. The next day he regrets what he has done and consequently swears an oath that he will not touch a drop of liquor for 21 years. At this point in the book (chapters 2-3) there is an 18 year gap in the book. The book is set in the summer of around 1830 we know this because "before the 19th century had reached one-third of its span." As it was set in the 1830's the landscape would have been very different from today. ...read more.

She might have been in control of the situation as Henchard went on to sell his wife. The following morning Henchard wakes up and finds his wifes' ring on the floor confirming his suspicion that the happenings of last night were not merely a bad dream. He had sold his wife to a sailor called Newson who represented the modern world. Hardy emphasises this by choosing a name that can be broken down into "New son." This is ironic as Henchard is anti change and the new world. As Henchard emerges from the tent and looks around him he starts to notice things that two tired walkers may not have done. On one side there was an open down plantation. On the other, upland stretching away down into valleys dotted with burrows and trenched with the remains of a pre-historic fort showing us that there has been people living here for thousands of years and how time has turned the forts into ruins. This all gives it a sense of history, time passing and its effects. Henchard left the village and came to a small chapel where he swore an oath that he would not touch a drop of liquor for 21 years. He left and there is an 18-year gap in the Book. Now two people both adults walked along the little road leading to Weydon Priors. ...read more.

At this point in the story the other main character Donald Farfrae a Scot is introduced. Farfrae is the very opposite of Henchard. He is a traveller in search of wealth and possesses the intelligence that Henchard is missing "In my business tis true that strength and and bustle build up a firm. But judgement and knowledge are what keeps it established. Unluckily, I am bad at Science, Farfrae; bad at figures - a rule of thumb sort of man. You are just the reverse." Elizabeth-Jane goes on to marry Farfrae but faults of Character and his guilty past aswell as change in commerce eventually drag him down. In conclusion, although people tried to keep things as they always had been the passage of time is unstoppable and the victims of it are the people. Weydon Priors resources had gradually gone to the towns and cities and it had continued to decline. Hardys' view was that time had been unkind to Susan who had a troublesome and disturbing life. The most successful person at stopping the progress of time was Henchard who managed to keep himself and the town of Casterbridge the same for 20 years. Time however eventually dragged him down too as he was unable to adapt to changes in rural commerce. For the most part time is portrayed as an unstoppable force that preys on the people around it. The End By Nick Coombs. ...read more.

This essay tends to narrate the changes of characters, but at times it analyses how time is utilised by Hardy to present the development. Most of the introduction is irrelevant - it is a common problem with essays that they ...

This essay tends to narrate the changes of characters, but at times it analyses how time is utilised by Hardy to present the development. Most of the introduction is irrelevant - it is a common problem with essays that they introduce an essay by giving some contextual information about the author. Not only does this waste time in an exam, or words in coursework, but it shows that the essay hasn't got a clear focus on the question. I like how the candidate is perceptive in the way Henchard is able hold off time, but it eventually dragged down also.

Although this essay is perceptive in parts, it lacks any real analysis. This essay often retells the story. If I were doing this essay, I would've picked out some short concise quotes which highlight the changing of time, focusing on choice of words and the effects it has on the characters. This is done in places, but it would be nice to see it more thoroughly. Although the reader response isn't directly questioned in the question, it was a common flaw in my class that people neglected this. If the essay had mentioned sympathy, hatred, etc for characters due to the time passing, it would've made the answer stronger.

This essay is on the whole written well, but with many GCSE essays, it unnecessarily begins with "This essay will". I would also suggest that some of the paragraphs are merged: in an essay such as this, four or five key paragraphs should be used to show the clear development of time. Yet, with the number of paragraphs used in this essay, it is unclear as to what each adds to the argument.